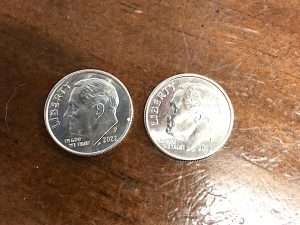 Since the start of the COVID-19 pandemic, I stopped carrying and spending cash as a precaution. When research caught up and said that there was no significant risk of contact infection, I did not refill my wallet with cash. Then there was an announced coin shortage due to coins not circulating.

Rather than add to the problem, I dumped my change jar and continued to use credit cards. Like many people, I became used to paying with apps and credit cards. The few times I use cash is at the lottery vending machine. When it is time to buy tickets, I will pay for groceries with a debit card and ask for cash back to feed into the lottery vending machine.

I recently decided to carry some cash and use it for smaller purchases. I make a small purchase using cash. When the cashier handed over the change, I dropped it in my pocket and left the establishment. Sometime later, I will take a look.

The U.S. Mint is manufacturing coins at a record rate, but circulation issues still cause shortages. Even though the issues are not as dire as they were in early 2021, it is amazing to find 2022 coins this early in the year.

Here is a tip-of-the-cap to the U.S. Mint for their manufacturing prowess and the Federal Reserve for making sure these coins find their way into circulation.