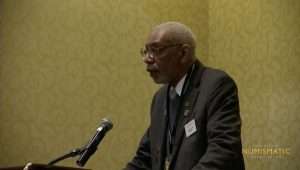 While watching the National Money Show opening ceremony online, the speakers mentioned that it was the fifth time the show was being held in Colorado Springs.

While it is nice that the National Money Show is in Colorado Springs, other cities could hold the show. The ANA refuses to consider holding any show in Washington, DC.

Regulations by the city’s government and the city council’s unresponsiveness to address the issues prevented the ANA from considering Washington for one of their shows.

Since Larry Shepherd stuck the ANA with keeping the World’s Fair of Money in the Chicago area, Washington has new facilities to host the ANA shows.

Even though Washington is the home of the U.S. Mint, the Bureau of Engraving and Printing, and the Smithsonian National History Museum, where the National Numismatic Collection is located, the ANA cannot get past the memories of past problems to explore new opportunities.

The problem was driven home by Larry Shepherd, who said on an episode of the Coin World Podcast that Washington cannot hold an ANA show. Shepherd, who probably has not been to Washington since being dismissed as the ANA’s executive director, has no clue how his pronouncement is wrong.

The ANA can hold either show at the National Harbor, a development outside the Beltway in Oxon Hill, Maryland. Aside from being the location of an MGM Grand Hotel, the 2,000 room Gaylord National Resort & Convention Center can comfortably host the ANA.

But people like Larry Shepherd do not keep up with the present and do not know about National Harbor. Instead, they isolate themselves in their prejudices and ignorantly dismiss the ideas.

The Washington region can be a destination for collectors and their families. After all, Washington is the nation’s capital. Come for the show, stay for the history. Bring the kids. We can go to the Smithsonian American Art Museum to see the art of the artists who designed U.S. coins. Tour the city to see the statues by some of those same artists.

What if the ANA worked with the Smithsonian Institute to create exhibits around the coins and the history they represent. How fascinating will it be to take the Native American Dollar program and create a program to expand on their message at the National Museum of the American Indian?

Even though the Bureau of Engraving and Printing has brought interesting items to other shows, they can host special tours in their Washington printing center for ANA members.

When it is time to visit the bourse, it will be in the expansive convention center at the Gaylord Hotel. After the bourse closes, convention-goers can stay in National Harbor to have a good time, including a ride on the Capital Wheel overlooking the Potomac River.

Since National Harbor is in Maryland, the sales tax laws favor bringing all of the shows to the area.

Maybe Larry Shepherd is right. All Washington could do is add new educational opportunities and create family fun to increase the show’s attendance. It is not the direction it appears the ANA wants to go.

Opening Ceremony at the 2022 National Money Show in Colorado Springs