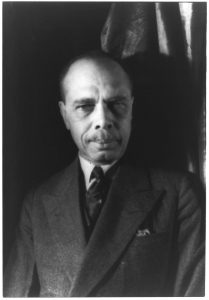 James Weldon Johnson was a writer and civil rights activist who was a leader of the NAACP. In 1920, Johnson was chosen as the first African-American executive secretary of the NAACP, effectively becoming its chief operating officer.

Johnson was known for his writing about black culture during the Harlem Renaissance. His work includes the lyrics for “Lift Every Voice and Sing,” which later became known as the Negro National Anthem. The music was written by his younger brother, J. Rosamond Johnson.

Johnson’s other accomplishments include his appointment as the U.S. consul in Venezuela and Nicaragua by Theodore Roosevelt, the first African-American professor hired by New York University, and later became a professor at Fisk University.

If this bill becomes law, 85-percent of the surcharges will be divided equally between the Marshall-Motley Scholars Program, the Stanton College Preparatory School, and the National Association for the Advancement of Colored People (NAACP). The rest of the money will be given to the James Weldon Johnson Foundation.