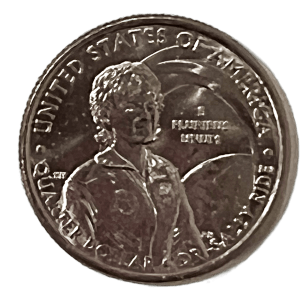 The current quarter in the American Women Quarters Program honors Dr. Sally Ride. These coins are showing up in change in an increasing number, with several landing in my pocket this week.

Dr. Ride was a physicist, astronaut, educator, and the first American woman to rocket into space aboard the Space Shuttle Challenger in 1983. At 32, Ride was also the youngest American in space.

On STS-41G in 1984, also on the Challenger, Ride was joined by Dr. Kathryn Sullivan, a geologist, making it the first space mission with two female crew members.

The reserve depicts Dr. Sally Ride next to a window on the space shuttle. It was designed by Elana Hagler of the Artistic Infusion Program and sculpted by U.S. Mint Medallic Artist Phebe Hemphill.