Things That Make You Go Hmm…

Life can be confusing. One of those confusions is when people do something for reasons that are not obvious. Then when the people were asked why they did not offer any answers. 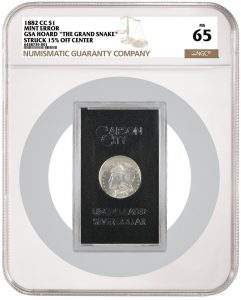 The coin is fascinating in that it looks stunning, survived for so long to be part of the GSA Hoard, and the original owner purchased the coin for $30 in 1972. But that is not what makes this coin a curiosity.

Rather than NGC applying the tamper-evident label that NGC wraps around the GSA holder, NGC placed the entire GSA holder in one of their Mega Holders.

According to NGC’s website, the Mega Holder can hold a coin as large as 180 mm (about 7-inches) in diameter and 28 mm (about 1.1-inches) thick. The NGC holder appears to be three times the size of the GSA holder.

Understandably, a collector would send a coin of this significance to NGC for authentication and grading. But why did NGC have to slab the entire GSA holder? The coin is 38.1 mm in diameter (less than 1-inch) and is in a holder for a coin seven times its size. The coin, which should be the central focus, appears lost.

I tried to ask NGC about their decision to slab the entire GSA holder, and the response I received referred me back to the article that does not discuss the decision. There must be a reason other than “this is what the client wanted.” Even if NGC does not want to answer the question, I want to see the coin in person.