Looking Back: US Assay Office in New York City Rocked by Explosion!

My silence the last few weeks has been because of a family crisis. My mother was diagnosed with Lupus 15 years ago and has been trying to fight the attacks over the years. This week, the Lupus won and she died quietly with her husband (my father), sister, and a rabbi at her side. I will write more about her later. But I wanted to post something now.
The following was written by WoodenJefferson on the NGC Forums. I thought it was a good story and received his permission to share it with my readers.

On September 16, 1920, the flood of Wall Street lunch goers did not even notice a nondescript man on a red horse-drawn cart outside the U.S. Assay Office. After the man quickly disappeared into the crowd, the cart suddenly exploded, killing more than 30 people and injuring nearly 400 as metal fragments rained from the sky. Both the horse and wagon were entirely destroyed in the noon time blast.

Speculations of conspiracy and terrorism abounded, but crews cleaned the damage overnight (not realizing they were destroying crucial evidence), leaving almost no clues behind.

The best tip came prior to the explosion. A letter carrier found four crudely spelled and printed flyers in the area from a group demanding the release of political prisoners. The group, called the “American Anarchist Fighters,” resembled the Italian Anarchists that used similar flyers in two prior bombing campaigns.

The FBI originally suspected followers of Italian Anarchist Luigi Galleani, but the case could not be proved and promising trails became dead ends.

The Wall Street Explosion occurred in New York City at one minute before noon on the day of the explosion, across from the headquarters of the J.P. Morgan Company on Wall Street near the corner of Broad Street. The junction was the financial epicenter of the United States—the J.P. Morgan Company, the N.Y. Stock Exchange, the U.S. Assay Office, the Sub-Treasury Building all surrounded the site. It was a system bitterly hated by the radicals and known anarchists.

Although persons were killed or injured in the street, no one inside the surrounding buildings were harmed. Ironically, the bomb that rocked the entire lower end of Manhattan claimed not the reviled financial giants but rather the “little people”: the clerk, the stenographer, delivery boys. Wall Street was in utter shambles. A huge crater was blown into the street. 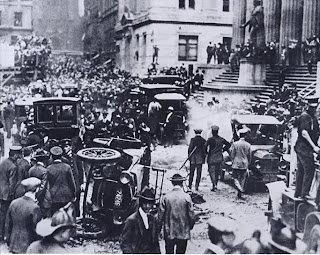 Thousands of people lined up the streets to see the blood-soaked avenue. The New York Daily News photographer George Schmidt was among the first to arrive and photographed the scene.

The New York Assay Office was rebuilt and opened in April, 1921 with a vault capable of holding $5 billion in gold. Today, that vault area is used by the Federal Reserve Bank of New York.

Image of US Assay Office of New York was published in The Site of the Assay Office on Wall Street by William E. Verplank, 1921
Photo of the aftermath of the 1920 explosion is courtesy of Iconic Photos.
Click on the image to enlarge.