Tonight, I watched the last medal event of the 2010 Winter Olympics. I love hockey and being a crass American, I was rooting for Ryan Miller (Buffalo Sabres), Zach Parise (New Jersey Devils), and Patrick Kane (Chicago Blackhawks) to lead the USA team to the gold. There was also Ryan Suter (Nashville Predators) of the Suter family that seemed to dominate the NHL in the 1980s and into the 1990s whose dad, Bob, played for the 1980 Miracle on Ice team in Lake Placid. But Team Canada played well and won the gold when the Pittsburgh Penguin’s Sidney Crosby shot it past Ryan Miller for the game winning goal in overtime. It was a thrilling game and fitting for the Olympic Hockey finals.

Hockey is to Canada as basketball is to the United States. Hockey was invented in Canada and they consider it their birthright to win. In the United States we had that same feeling about basketball. Those of us who were around for the 1972 Munich clock controversy remembers how it felt when the Soviet Union was given the break to win the game. The US Basketball Federation protested the game to FIBA, international basketball’s governing body. The protest was denied when the representatives from the communist nations out voted the non-communist nations 3-2.

As much as the Olympic committee wants to keep politics out of the games it will play a role as long as the athletes wear country designations. The 1972 Munich summer games included the killing 17 members of the Israeli Olympic team by Palestinian terrorists. Israel withdrew its remaining members while the Soviet Union, most of the eastern bloc under the control of the Soviet Union, North Korea, and ten Arab nations refused to allow their flags to fly at half-staff for the rest of the games. With the Cold War becoming its chilliest, the loss in basketball was not only a national tragedy but fueled a nationwide hatred against the Soviets.

This is not to say hockey does not have its place in the United States. We celebrate the 1980 Miracle on Ice when the United States sent true amateurs against the world, especially those countries from the eastern bloc whose players were technically in the army but played hockey all of the time. The Soviet Union were the prohibitive favorites but hated by Americans for being professionals and for being Soviets. There was a lot of Cold War hatred between the countries. But nobody gave the U.S. team a chance except for Coach Herb Brooks. That 4-3 win against the Soviet team continues to raise emotion not only because how the team won, but for the political attitudes at the time. Democracy and fair play prevailed over the communists and cheaters. Even USA Basketball took great pride in watching the hockey team stick it to the Soviets.

What people forget is that the game against the Soviets was not the gold medal game. The US team had to play one more game against Finland in order to win the gold. It was a tight game which the US won 4-2 allowing the US to stand atop of the hockey medal stand. One of my memories was that after the game Ken Morrow joined the roster of the New York Islanders (my favorite team) and won a Stanley Cup making him the first player to win a gold medal and the Stanley Cup in the same year.

We should not forget about what is being called the Forgotten Miracle of the 1960 US Hockey team. The winter games that were held in Squaw Valley, California featured the powerhouse Soviet team and the Canadians who were also considered favorites for a gold or a silver medal. But the US team of “nobodys” beat Sweden, Germany, Canada, Soviet Union, and Czechoslovakia in the round-robin series to be the only undefeated team in the final round. The team celebrated while the news made front page news but the celebration did not rise to the levels of the 1980 team. While the Cold War was ongoing, it was ongoing (remember Duck and Cover?) it was not considered at the same level as in 1980. The level of rhetoric had not started to climb. Tensions would begin to increase in October 1960 when Soviet Union Prime Minister Nikita Khruschev banged his shoe on a table in protest during a meeting at the United Nations while denouncing “American Imperialism.” This was two years before the Cuban Missile Crisis. 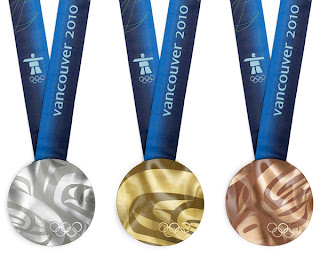 The actual medals that the Olympians receive are the physical reward for winning. In years past medals used to made of the metal they represented (e.g., the gold medal was made of gold), nowadays the price to create solid gold, silver, and bronze medals are prohibitive. Medals are made of less expensive alloys with plating of the precious metal. Although Royal Canadian Mint does not publish the makeup of the metals on their website, the fact that they are the largest and heaviest medals ever produced allows us to make a logical assumption that the medals are made of base metals plated with the precious metals. Regardless, the medals created by the RCM are the most uniqued in the history of the Olympic games. The wavy medals feature a unique design where no two are alike that are based on four designs that are imprinted randomly on each medal. While the medals received by the 1960 and 1980 hockey teams can be considered traditional in their design, the 2010 medals have a unique artistic quality that will make them memorable for years to come.

In the future, the 2010 US Hockey team will be prouder of their silver medal accomplishment than they feel tonight. But tonight belongs to the Canadians. They played a good game and deserve their gold medals.

Congratulations also goes to Vancouver, the province of British Columbia, and the people of Canada for helping make these two weeks one of the most memorable in Olympic history.

P.S., I love visiting the west coast of Canada. If you can go to Vancouver and even Vancouver Island (take the ferry, it’s a great trip), it will be a very enjoyable vacation. I look forward to my next visit!