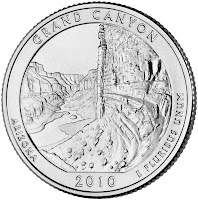 As with previous releases, the U.S. Mint released an edited B-roll video of the launch with highlights, scenery, production footage.

The Grand Canyon is the first of the quarters that represents a national park I have visited. Looking at the background over his shoulder, I understand why U.S. Mint Director Ed Moy looks happy. Although I have only been to the South Rim, the Grand Canyon is still one of the most awesome sites in the United States and worth visiting.

Quarter image and video complements of the U.S. Mint.