Fun But Not That Challenging

While working on the second part to “How Are Coins Priced,” I wanted to let my readers know that not only am I still here, but still collecting. How can I stop? There are so many interesting things out there that even as I try to decide how to cut back, I am having a difficult time determining what to sell and keep!

Officially, I am not a collector of challenge coins but have a few that were given to me as part of my work. The first one I received was from US-VISIT after giving a talk about privacy concerns to their employees. It was a great and unexpected gesture and the collector side of me appreciated receiving the challenge coin. 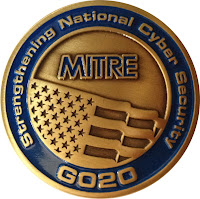 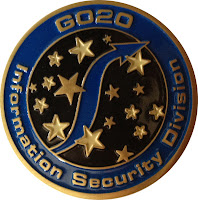 Last year, I participated in a company-internal conference on information security. My presentation discussed different aspect of web tracking technologies. It was based on research I performed for one of our clients trying to understand what was being said in the technical media so they could set policies to assure the public that the government was not tracking them. Although many of the technologies were known by my colleagues, it was one of the few times many of them have seen it discussed on one place. My talk was well received. Recently, the department that sponsored the conference sent certificates of appreciation and included a challenge coin in the envelope (pictured here). Because of my hobby, I was happier to receive the challenge coin than the certificate! 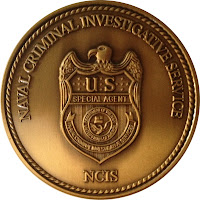 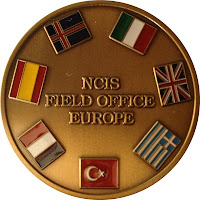 A few months ago I purchased the next challenge coin from the Naval Criminal Investigative Service (NCIS) European Field Office. I have not worked with NCIS nor have been investigated by them, but with the popularity of the show on CBS and the flags on the reverse, I thought it was an interesting coin. After trying to find out more information about the coin, I spoke with an NCIS investigator who worked in the Europe and Africa Field Office. I was told that the challenge coin was at least 15 years old since it has been that long since the NCIS reorganized offices and combined Europe and Africa into one office. My contact said that the reverse of the challenge coin was redesigned to remove the flags—which at the time represented where the support offices were located with the main field office in Italy. I learned a lot about NCIS from this person that does not make the television show that in their honor, I will add this challenge coin to my collection.

When I started working for this company 11 years ago, I did not think that one of the perks would be adding to my collection in this manner. Since I plan to continue to work there for a while, I hope to be honored to receive more challenge coins.