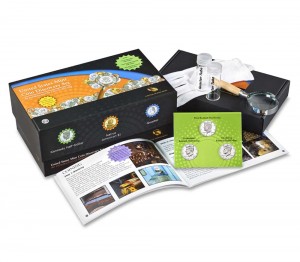 The Coin Discovery Set — An Introduction to Coin Collecting is a brand new offering in 2014 and is perfect for the beginner coin collector. It includes three 2014 Kennedy Half-Dollars in three different finishes — proof, uncirculated and circulating. Coin collecting supplies include coin tubes for collecting your own quarters, a magnifying glass and cotton gloves. An educational booklet explaining the coin production process and the different finishes is also included. Plus, the set’s box can be used to store any of the proof sets from the U.S. Mint as you start your own coin collection!