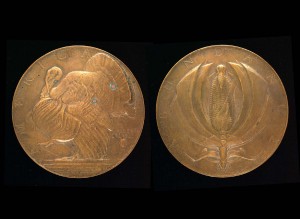 American Abundance designed by Albert Laessle and issued in 1934

Thanksgiving was first celebrated in 1621 by the Dutch settlers at Plymouth, Massachusetts to celebrate a successful harvest. It was a tradition that the Pilgrims brought with them from Europe. After the birth of the United States, President George Washington issued a proclamation honoring the Thanksgiving harvest during his presidency. The only other president to issue a Thanksgiving proclamation was President James Madison.

As part of his attempt to maintain the union, President Abraham Lincoln issued a proclamation that made Thanksgiving Day a national holiday in 1863.