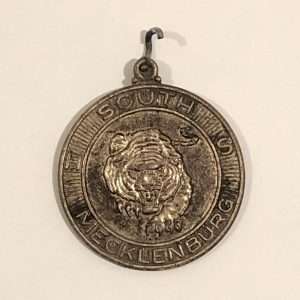 Hometown collecting now includes this medal from South Mecklenburg High School, where I went in the 1970s.

Over the last few years, I have become a fan of hometown collecting. Hometown collecting is personal, and it represents your past, your family’s past, and even the history of where you grew up or currently live. Some of us moved while growing up and can look for collectibles from multiple places.

I went to high school at South Mecklenburg High School. It was in one of the county’s unincorporated areas with a mailing address of nearby Pineville. Pineville is famous for being the birthplace of James K. Polk, the 18th President of the United States.

South Meck was the local basketball power. Future college and pro stars like Bobby Jones and Walter Davis played for South. After Jones and Davis graduated, they went to play for the University of North Carolina and then starred in the NBA. We won the State AAAA Championship my sophomore year.

While doing my hometown search for numismatics from Brooklyn and New York City, I had an idea to search for items from other times in my early life. I entered “South Mecklenburg” in the search bar to see what I could find.

After scrolling past old copies of the school yearbook, I found a bronze medal for the high school. I do not remember a medal like this. After I dug through a box to find an old yearbook, it resembles a school’s logo in the late 1960s and early 1970s. Since I collect numismatics of my past, I bought the medal and waited for it to be shipped.

The seller was from Europe and waited for the mail to swim across the pond. It was better looking in hand than in the picture online. The medal is 42mm in diameter with something to attach to a chain or a ribbon. It is one-sided, and Herff Jones is engraved on the reverse. I tried to contact Herff Jones and said they do not think they have records going that far back. Someone was going to look and see what they could find.

I graduated from South in 1978 then enrolled at the University of Georgia. Although I have found a few medals from Georgia, I may change my search criteria and see what else I can find.