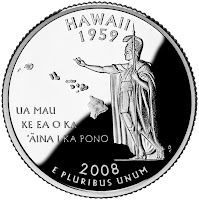 The final coin of the 50 State Quarters® program will be unveiled during a ceremony Honolulu, Hawaii. Hawaii’s coin features the image of King Kamehameha with his outstretched arm over the united islands of Hawaii with the state motto Ua Mau ke Ea o ka ’Āina i ka Pono (The Life of the Land is Perpetuated in Righteousness).

Kamehameha rose to power in the late 18th century deposing rulers in his way. By 1790, Kamehameha was King of what we know today as the big island of Hawaii. Using arms bought from British and American traders, Kamehameha launched attacks on neighboring islands. After many battles and enduring illness, Kamehameha united the islands in 1810.

In 1893, as Queen Liliuokalani ascended to the throne on the death of her brother, King Kalakaua, she received petitions calling for reforms. Rather, Liliuokalani tried to strengthen her power which made many American and European businessmen nervous. A coup d’état was arranged leaving Queen Liliuokalani imprisoned at Iolani Palace under house arrest.

For the next few years, Hawaii was an independent republic managed by various business interests, including the United States. A counter rebellion was attempted by loyalists to Queen Liliuokalani but was suppressed. However, official policy under President Grover Cleveland was not to support the new government until the government was returned to Liliuokalani. This policy changed when William McKinley succeeded Cleveland. Two years into his administration McKinley singed the Newlands Resolution in 1900 annexing Hawaii a territory of the United States.