DC Quarter and a Missed Opportunity 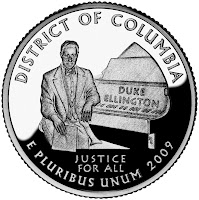 This week, the US Mint released the quarter for the District of Columbia that honors Edward Kennedy “Duke” Ellington. The Washington-born Ellington was one of the most influential musicians of the 20th century with a career that spanned 60 years until his death in 1974. Ellington was awarded the Presidential Medal of Freedom by President Richard Nixon in 1969.

Ellington was a great musician and musical ambassador. His music was very popular amongst the Washington society crowd in the early part of the 20th century. When his career picked up, Ellington moved to New York City to take advantages of opportunities. Ellington reinvented his career twice and was working on new projects when he died on May 24, 1975.

Although Duke Ellington was a great musician and worthy of an honor, those who were involved with the District of Columbia quarter selection process missed an opportunity to properly honor the District and make a statement.

Following the passage of the budget bill that contained the provisions for the DC and Territories Quarters program, then Mayor Anthony Williams appointed a committee to determine the design of the DC Quarter. When the design descriptions were submitted to the US Mint for approval, they included the phrase “Taxation Without Representation.” The phrase, which is on District license plates, is a protest noting that US citizens who live and vote in Washington does not have a representative in congress, who levies taxes and has veto authority over the city’s mayor. The Mint rejected the design as being too political.

When the design was rejected, newly elected Mayor Adrian Fenty reconvened the committee to come up with a new design. Several designs were considered and put to a vote by District residents. The design honoring Duke Ellington won decisively.

Unfortunately, the best option for the quarter design was considered. If the District government was serious about getting their message out about the lack of congressional representation for Washingtonians, they could have sparked the conversation by selecting a design that honored Walter E. Washington, the first elected home-rule mayor of Washington, DC.

Washington, DC is the only world capital that is not represented in the government which it hosts. For nearly 200 years, congress has taken a pedantic view of Article 1, Section 8 of the US Constitution stating:

To exercise exclusive Legislation in all Cases whatsoever, over such District (not exceeding ten Miles square) as may, by Cession of particular States, and the acceptance of Congress, become the Seat of the Government of the United States

By doing this, congress has been giving the residents of the District of Columbia less rights and representation that any of the other states. Congress controls the District, its revenues, and its laws. Legislation passed by the city council and signed by the mayor has to be approved by a congressional committee before it becomes law.

The Georgia-born Walter Washington was appointed as Commissioner of the District of Columbia by President Lyndon B. Johnson in 1967. His early years were marred with race riots and other issues that he had problems dealing with because of the restrictions placed on the appointed commissioner. After much lobbying, congress passed the District of Columbia Self-Rule and Governmental Reorganization Act of 1973 that allowed the city to elect its own government. Washington was elected as the first mayor of Washington, DC.

If the District honored Walter Washington on its quarter, not only would it have been more appropriate from a historical perspective, it would have given the home-rule activists an opening to talk about their lack of representation in congress. People who have asked about this person on the quarter and they could have filled in the blanks. While it would not have been an overt message, it would have been subtle and shown intelligence with integrity.

I like Duke Ellington but Walter Washington would have been a better subject.

DC Quarter image courtesy of the US Mint.
Image of Walter E. Washington from Wikipedia.