After I posted a review of the DC quarter, I remembered that I had not posted what I consider the 10 State Quarter designs that best represents history and teaches us something about the state and our nation. These quarters may not be the best designs, but they represent a unique story about the state that makes it unique and contributes to the nation. Every one of the designs told a story of accomplishment and a proud heritage for the state it represents. I also learned something after each of these quarters were released. 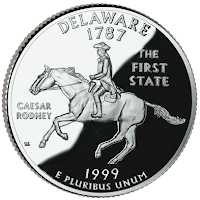 #1 Delaware
Engraver: William Cousins
On the very first coin, I learned who Caesar Rodney was and why is he riding a horse on the back of the Delaware quarter. Rodney was one of Delaware’s representative to the Continental Congress. He was in Dover attending to other business when he learned that Thomas McKean and George Read were deadlocked on the vote of independence. Rodney rode 80 miles from Dover to Philadelphia to vote with McKean to allow Delaware join eleven other colonies voting in favor of independence. Rodney’s signature appears on the document representing Delaware and on the Declaration of Independence. Now that’s history! 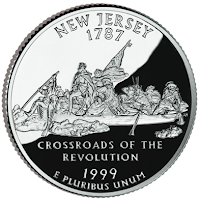 #2 New Jersey
Engraver: Alfred Maletsky
We learned in our history classes that General George Washington lead the revolutionary troops across the Delaware River in the middle of the night to surprise the English at the Battle of Trenton on December 26, 1776. In addition to George Washington, future presidents James Madison and James Monroe was part of the contingent. Rivals Alexander Hamilton and Aaron Burr along with future Chief Justice of the Supreme Court John Marshall were soldiers serving under Gen. Washington. The Battle of Trenton was a key battle that helped change the outcome of the war for independence. 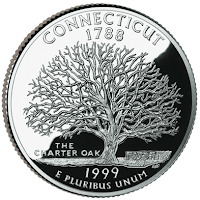 #3 Connecticut
Engraver: T. James Ferrell
Although the Charter Oak appeared on the reverse of the 1935 Connecticut Tercentenary Commemorative Half Dollar, younger collectors probably have not seen the coin. Adding it to the Connecticut state quarter had me looking up the history of this tree. It was said that the colony’s charter was hidden in a cavity within the tree when James II sent a new governor to Connecticut to reclaim the document. One of the first “battles’ against the authority of the British monarchy. 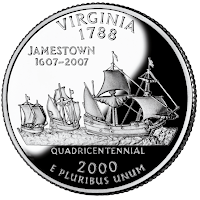 #4 Virginia
Engraver: Edgar Z. Steever
Jamestown, Virginia was the first permanent European settlement in the New World and would celebrate its quadricentennial in 2007. The design features the three ships that brought the first settlers to the new colony: Susan Constant, Godspeed, and Discovery. We are reminded of the beginning of this nation and how they came to the new land. Having visited Jamestown, I thought the design was exciting. 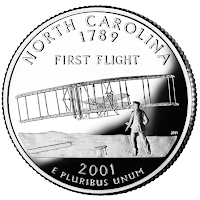 #5 North Carolina
Engraver: Don Everhart
On a cold, wind swept day on December 17, 1903, Orville and Wilbur Wright made the first powered, controlled, sustained airplane flight from the sands outside of Kitty Hawk, North Carolina—now the town of Kill Devil Hills. For three years, the Wright brothers lived in Kitty Hawk testing and perfecting their design that culminated in four successful flights on December 17. We may take flying for granted today, but this one event significantly changed history. 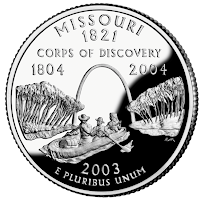 #6 Missouri
Engraver: John Mercanti
The Corps of Discovery headed by Meriwether Lewis and William Clark that explored the Louisiana Purchase was an significant event that lead to the country’s western expansion across the continent. The trip ended in what is Oregon today. Amongst his party was his Indian guide Sacagawea and her baby Jean-Baptiste Charbonneau. The design shows Lewis and Clark’s return to St. Louis from their venture. 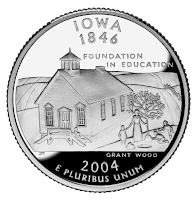 #7 Iowa
Engraver: John Mercanti
It would have been easier for Iowa to create a quarter design based on its agricultural heritage. Instead, they chose to celebrate their education values demonstrated in their history. Basing the design on Grant Wood’s “Arbor Day,” the quarter shows a one-room school house with a teacher helping students plant a tree. When you learn that Iowa was one of the first states to organize their schools in county-based districts. Along with being amongst the first to form high schools, their experiences were adopted in other states. A subtle, yet important, historical note. 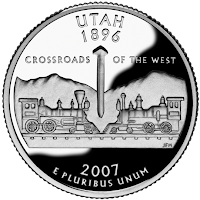 #8 Utah
Engraver: Joseph Menna
On May 10, 1869, the Union Pacific and Central Pacific railroads officially completed the first transcontinental railroad. The completion was celebrated at Promontory Summit, Utah with the driving of the Golden Spike. Although there was one segment in California that was completed later, the transcontinental railroad provided significant economic development for the newly expanded areas of the country. 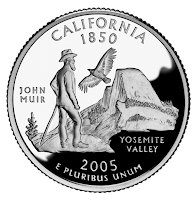 #9 California
Engraver: Don Everhart
When Governor Arnold Schwarzenegger announced that the design for the California quarter would honor John Muir, I had to go beyond my basic education as the who Muir was. I knew Muir was a naturalist and the founder of the Sierra Club. What I did not know was that Muir was instrumental in saving Yosemite Valley and Sequoia National Park. I also learned that Muir was widely published about ecology and proposed ecological programs that began to gain favor in the 1970s, more than 60 years following his death. Although he generated a lot of controversy, his concepts show benefits today. For teaching me about Muir, California’s quarter makes this list. 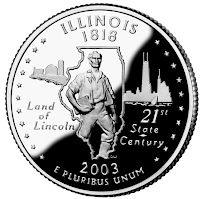 #10 Illinois
Engraver: Donna Weaver
Anyone who was educated in the United States knows the basic story of Abraham Lincoln. We know that he was the 16th president and issued the Emancipation Proclamation. We know he was the president throughout the Civil War and delivered the most remembered speech at Gettysburg, Pennsylvania. Lincoln was born in a log cabin in Kentucky and was assassinated at Ford’s Theater in Washington, DC. But I learned that Lincoln interested in the river and railroads. He holds a patent related to the buoying of vessels. I knew that he was the first Republican elected president but I did not know he was one of the party’s founders. There is so much more fascinating information that I learned about Lincoln that was never taught in school, but this is supposed to be a short paragraph. You should read some of the books about Lincoln. He is a fascinating person and what he did as president is the reason why he is considered our greatest president.