On Friday, I connected my iPhone to my computer and opened iTunes to sync everything together. During my sync, iTunes reported that there were application updates. One of the updates was the PCGS Photograde for the iPhone application. Since PCGS upgraded the application and PCGS Photograde website, so quickly after its initial release, I thought an update on the review was in order. 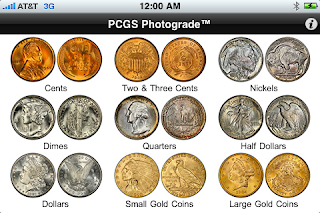 On both the website and the iPhone app, the home page now has entries for “Two & Three Cents” coins and divided the gold into “Small Gold Coins” and “Large Gold Coins.” The full look of the screen looks good and gives the website and iPhone app the impression that it is more complete. Seeing these new images suggests that PCGS added coins from the 19th century coins. But when tapping on the image for the Cents, I saw a full screen of cents starting wit the “Liberty Cap Large Cents” through the Lincoln cent. Not only did PCGS add 19th century coins but they went back to the first coins issued by the US Mint. After looking at the images, I confirmed that my favorite 1794 cent looks like PCGS’s 1796 cent that they grade PO-1. 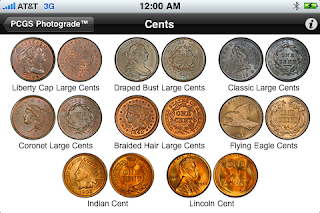 After seeing how far back the images go, it was time to find out how modern PCGS gets. Because of size limitation, the iPhone app does not include years of issue, but the website does. On the website, says that the Lincoln Cent runs 1909 to Date, yet all of the coins imaged were pre-1959 wheat-back cents. There were no images of the Memorial cents nor images of the lowered relief coins. For those looking to put together high grade modern sets it is a serious omission.

In fact, after checking other coin images, all of the images of coins that are in circulation today do not have images of modern coins. Jefferson Nickels do not include mint state grading images of the current design, quarters and halves do not include the bicentennial images, and the quarters do not show the obverse of the State Quarters design. As for the dollars, the images end with the Peace Dollars. As I said in the first review, given that there were some circulation of the Eisenhower and Susie B’s as well as striking issues with the Eisenhower dollar, it would be nice to have an image reference of these coins. 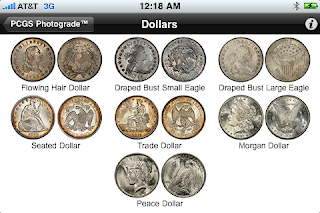 The new images of the added coins are beautiful in all grades. Users of this applications will have a great tool for determining the grade of coins. However, I have the same complaint I made the last time on the use of toned coins. I understand some collectors like toned coins, but the toning does detract from seeing the subtle differences in between high grade coins.

PCGS has taken a great tool and made it even better. I like the iPhone application for being portable when I attend coins shows. For this upgrade, I give both the website and iPhone app a grade of MS67, a premium grade for their new additions but less than perfect for the omission, especially for not including the Eisenhower and Susan B. Anthony dollars.