Palladium Eagle May Be Coming

In a rare swift move by the House of Representatives, H.R. 6166, American Eagle Palladium Bullion Coin Act of 2010, was introduced, discharged from the House Committee on Financial Services, considered on the floor, and passed without objection. With its passage in the House, the bill was Engrossed and sent to the Senate for consideration.

In the Senate, the bill was read twice and referred to the Committee on Banking, Housing, and Urban Affairs. Congress has adjourned for the election season.

H.R. 6166 was introduced by Rep. Denny Rehberg (R-MT), the representative at-large from Montana. Montana is home of the Stillwater Mining Company, (NYSE: SWC) the only producer of palladium in the United States. Stillwater also owns platinum mines that supplies the U.S. Mint with platinum for American Eagle Bullion coins. With this bill, Rehberg adds his name to a long line of congressmen who have introduced bills to protect their state’s mining interests by using the U.S. Mint as a primary purchaser.

Since the price of palladium is less than the price of gold and platinum, it is possible that investors could consider palladium as part of a diverse portfolio. Those who believe in “end of the world” scenarios will not be interested because the secondary market is not as strong as it is for gold. 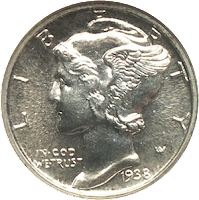 The bill requires that “the obverse shall bear a high-relief likeness of the ‘Winged Liberty’ design used on the obverse of the so-called ‘Mercury dime’” making it yet another bullion coins using a design from the early 20th century. For the reverse, the law says that it “shall bear a high-relief version of the reverse design of the 1907 American Institute of Architects medal.” Both the Mercury Dime and 1907 AIA medal were design by Adolph A. Weinman, whose Walking Liberty design is used on the American Silver Eagle coin.

In other words, congress saying that it does not trust the U.S. Mint to create a design suitable for this coin. While some might have an issue with the design of recent coins, it would be nice to unleash the creativity of the U.S. Mint’s artists and allow them to make a design to represent Liberty. Maybe if the artists were less constrained, they can use their talents.

Another provision of the bill is that aside from using palladium from U.S. sources, it allows the U.S. Mint to purchase palladium from other sources. The bill also makes a distinction between proof and bullion coins allowing the U.S. Mint consider minting proofs to meet collector demand… or not depending on whether there is a demand and a supply to meet the demand. In other words, it will be up to the government lawyers to figure out what is meant by the wording in the bill!

If the bill passes the Senate and signed by the President, palladium bullion coins will not be issued until 2012 because it is too late in the year for the U.S. Mint to plan to issue this coin.