We learned from President Barack Obama that the Joint Special Operations Command found Osama Bin Laden in a compound outside of Islamabad, Pakistan and killed him during a raid. A grateful nation thanks the members of JSOC for your successful operation and we are glad that none of your members were injured in the process. 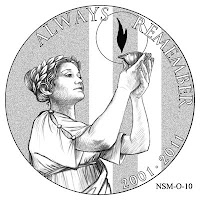 With the death of Osama Bin Laden nearly ten years after the attacks on September 11, 2001, we should remember all of those that died in those attacks on U.S. soil at the World Trade Center, the Pentagon, and Shanksville, Pennsylvania. We should also honor the sacrifices made by the members of the United States military and their families who gave of themselves and lives in the war on terrorism.

As numismatists, we can show our support in many ways. One way is to remember that later this year, the U.S. Mint will issue a silver commemorative medal whose surcharge of $10 per medal will be paid to the National September 11 Memorial & Museum at the World Trade Center to support the operations and maintenance. The bill, National September 11 Memorial & Museum Commemorative Medal Act of 2010, was signed into law on August 6, 2010 (Public Law No. 111-221 [Text] [PDF]) authorizes the production of 2 million one-ounce proof silver medals. 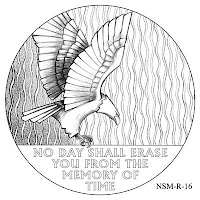 According to the law, the “design of the medals struck under this Act shall be emblematic of the courage, sacrifice, and strength of those individuals who perished in the terrorist attacks of September 11, 2001, the bravery of those who risked their lives to save others that day, and the endurance, resilience, and hope of those who survived.” Each medal must include the inscription of the years “2001-2011” and “Always Remember.” Medals can only be struck at the U.S. Mint facility at West Point and at Philadelphia.

At last report, the images in this post are those that have been recommended by the U.S. Commission of Fine Arts and the Citizens Coinage Advisory Committee. The U.S. Mint has not announced the whether they accepted the recommendations or when the medals will be available for purchase. Although I am not a medal collector, this is one medal I will purchase!

As for my feelings, I think the great jurist Clarence Darrow summed it up best: “I never wanted to see anybody die, but there are a few obituary notices I have read with pleasure.”