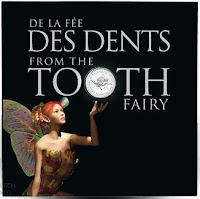 Are you a tooth fairy looking for something different to give leave that little loved under the pillow? Then the Royal Canadian Mint has an answer for you, especially if the toothless child is into coin collecting. Rather than leaving money, the RCM has produced a Tooth Fairy Gift Card with a special 25-cents Tooth Fairy coin.

Tooth Fairy legends started in Europe where it became a tradition to bury baby teeth as they fell out. Later, it became tradition to place the tooth under the pillow where the Tooth Fairy would collect the teeth, leave the children money, and give the teeth to the parents as a keepsake of their child’s growth. Whatever the tradition, the bottom line is the giving of money for the tooth. Why not make it memorable? 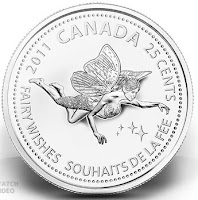 The card from the RCM also includes an envelop so that you can include more money than a quarter. For children in the United States, you can include other world coins if the child is a beginning collector or you can just leave some modern, legal tender alternatives. On either side of the border, an idea is to include the current Presidential $1 Coin or a few National Parks quarters. In Canada, the RCM has a animal and flower coins that would satisfy any child along with having the tooth fairy card.

Some traditions mark the sixth tooth as being special because it represents the strength in the child’s growth. For those, why not look at a large silver coin. the American Silver Eagle is a nice choice for U.S. children. In Canada, the 2011 Maple Leaf Forever silver coin with the three maple leaves is a symbol of Canada like no others.

I remember after the first few teeth how monotonous losing teeth became. This card could help a child along having those feelings.

This card is such a good idea, I wish I was playing tooth fairy for someone who could enjoy a card like this.