When I went to college for my undergraduate degree, the university’s programs did not include the ability to “minor” in a subject. Aside from the core courses, we were allowed to take eight classes in our major and four electives. Along with other requirements fill-ins I was able to take history and political science classes that would qualify as a minor today. It made taking some of those required courses tolerable.

History is what makes numismatics interesting. If you look beyond the shiny metal disks, you can follow the history of the country by studying the history of the numismatics. From the first Chain Cent through the Presidential Dollars, each coin tells the story of its time. What is even more amazing is that there are people researching further than ever before and finding new information that improves our knowledge. Others are looking at that history in different ways to better understand this history better.

When a friend sent a link to a recently discovered video about the manufacturing process at the U.S. Mint, I saw it as an opportunity to see where the U.S. Mint has come from. Ignoring the opening and closing titles from the company that posted the video which provides little relevant information, the film shows the process of manufacturing coins at the U.S. Mint in the early 20th century. Watch:

There is very little in the video to try to ascertain when the film was made. To try to date this film, let’s apply a little History Detectives-like logic. Looking at the video:

Based on this, we can assume that this was filmed between 1910 and 1927. But what does the film show? A lot of manual processes but the use of electricity to drive the machinery. This does not help narrow the dating except there was a large mintage of silver coins being shown. At the beginning there were also large stores of gold and silver and it film showed how the metals were smelted, formed into bars, and rolled flat to make the planchets.

At around the 36-second mark, the intertitle says “Another tidy fortune—$60,000 worth of silver bars ready to be converted into dollars, half dollars, and church collection.” (emphasis added) Converting silver into dollars stopped in 1904 and did not start again until 1921. The scenes makes the U.S. Mint look very busy and the striking of silver dollars to back silver certificates were necessary following World War I. Remember, the Pittman Act was passed in 1918 to allow the the melting of no more than 350 million silver dollars into bullion where a total of 259,121,554 ounces were sold to Great Britain at $1 per ounce to help them pay for the war. When the silver was replaced by mining and being paid back by Great Britain, it became important to replace the melted coinage for backing of silver certificates.

Providing the maker of the film did not take a little editorial liberties, that shifts the date of the film in the era of 1921-1927.

At 3:59 an intertitle is shown that reads “A forty-ton friction drive press stamps the die which later stamps the coin.” Then at 4:07, we are show the top of the friction drive press that pans down to a Mint worker positioning the dies in the press. But the press does identify itself. Arching across the top it reads “TAYLOR & CHALLEN LTD ENGINEERS BIRMINGHAM 1907.” Then below on the house for the large screw it says “PRESS 724.” 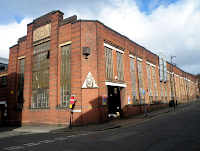 Taylor & Challen Ltd. Engineers were based in Birmingham, England. Founded in 1850 by Joseph Taylor, the company quickly rose as a leading maker of coining equipment. Their popularity came from being able to improve on the knuckle-joint action to efficiently strike and eject coins quickly from the press. According to one reference, the Model 724 was used in what we today call “hubbing,” the creating of the die by pressing the master hub into the die. What made the Model 724 well suited for this task was that the way Taylor & Challen was able to make construct the friction drive to provide the 40 tons of steady force at a slower speed than other presses to raise the clearest images on the dies with a single pressing. The U.S. Mint installed their first Model 724 in 1911 and was in use until 1933.

Just as Taylor & Challen out engineered their competition, they were out engineered by the Schuler company of Germany. Schuler invented the mechanisms to strike coins vertically so that gravity was used to speed up the striking process. Schuler remain the most popular presses around the world, including at the U.S. Mint. Taylor & Challen was never able to catch up and eventually went out of business in 1970.

As interesting as learning about Taylor & Challen was, it did not help narrow the date.

Unless I missed something, the only other observation was that most of the coins being shown in various forms were quarters. The bag tipping over at the end held a lot of quarters—Standing Liberty Quarters to be exact. So let’s say that this film was not taken in 1921 because the U.S. Mint was busy striking silver dollars. Since no quarters were struck in 1922, I can assert that the film was made between 1923-1927. I think that is as far as I can go with the evidence I can see.

If you have additional information or see evidence that I did not catch, please leave a comment to this post.