Passing of an American Hero

On October 31, 2012, President Ben Shelly of the Navajo Nation announced that Navajo Code Talker George Smith passed away on Tuesday at 90 years old. As a tribute to Smith’s service, President Shelly ordered the Navajo Nation Flag to be flow at half-staff through sundown on November 4.

After learning that Japanese intelligence experts broke every code the United States armed forces could devise, Philip Johnston, a missionary who learned the difficult Navajo language, proposed to create a code based on that spoken-only language. Johnston recruited 29 Navajo native speakers and they devised a code based on the Navajo language that Japanese intelligence was never able to decipher.

From the 200 word code, it grew to over 600 words and required 400 additional native Navajo soldiers to help with the communications across the Pacific theater.

The “Honoring the Code Talkers Act,” introduced by Senator Jeff Bingaman from New Mexico in April 2000, and signed into law December 21, 2000, called for the recognition of the Navajo code talkers. During a ceremony at the U.S. Capitol on July 26, 2001, the first 29 soldiers received the Congressional Gold Medal. The Congressional Silver Medal was presented to the remaining Navajos who later qualified to be code talkers.†

As part of the authorizing legislation, the U.S. Mint produced bronze versions of the medal for the public. These medals are are still on sale at the U.S. Mint. [Correction complements of the Mint News Blog]

“This news has saddened me. Our Navajo Code Talkers have been real life heroes to generations of Navajo people. They have brought pride to our Navajo people in so many ways. The Nation’s prayers and thoughts are with the family at this time as they mourn the passing of a great family man who served his country and protected his people,” President Shelly said.

We are all saddened by the passing of this true American hero. May his family and friends take comfort and pride in his memory.

The 2000 Navajo Code Talkers Bronze Medal sold to collectors by the U.S. Mint 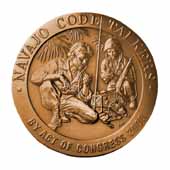 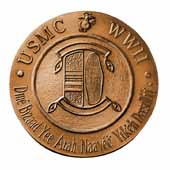