My hometown was in the news today for two very different reasons, yet both remind me of why I continue to love New York. 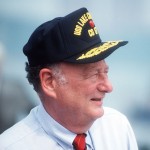 Mayor Ed Koch at the commissioning ceremony for the USS LAKE CHAMPLAIN (CG 57), 1988

In the morning, we woke to the news that Hizzoner, the former Mayor of New York City, Edward Irving Koch had died around 2 a.m. Friday morning. He was 88 years old.

Koch’s exuberance and love of New York propelled himself and the city from the what was seen as the bottom to a trajectory that you could not think of New York without Ed Koch or Ed Koch without New York. Koch’s perpetual question, “How am I doing?” will forever be his trademark throughout the streets, cabs, subways, highways, and byways of New York City.

A more happier note, it was on February 1, 1913 that Grand Central Station (really named “Grand Central Terminal” but that’s not what we called it growing up in New York) opened. It was not the first terminal on the site to bear the Grand Central name. The previous version opened in 1903 and comprised of three separate buildings. Over the next ten years the structure that stands there today was built in phases that including the underground rail tunnels that are still in use today.

Grand Central underwent a rehabilitation that started in 1994 through 2000 that cleaned up the famous ceiling in the grand concourse and reconfigured the above ground areas to include more shops. But it still represents the major transportation hub of New York.

Collecting transportation tokens are the ultimate numismatic collection that represents local history. Transportation has been at the heart of every city and can be used as a personal tie to your collectible. Tokens and medals representing local transportation can be more beautiful and significant than coins from the same era. Not long ago, I was able to find a pewter medal from the dedication of the East River Bridge. The bridge was rename in 1915 and is known today as the Brooklyn Bridge.

Having a collection of subway tokens reminds me of all those subway trips I had taken over the course of my life and the sesquicentennial medal of the Long Island Railroad represents my daily commutes from Long Island to my job at 30 Rock.

As I think about my hometown today, remember where you are from and consider starting a collection of tokens and medals that helps to tell your story. It can be as rewarding as your memories.

And to Hizzoner, you did just fine! Rest in peace.