An almanac that isn’t

Merriam-Webster’s online dictionary defines almanac as “a usually annual publication containing statistical, tabular, and general information.” Almanacs have been around for a while in various forms from the earliest times of writing to today. Early almanacs were simply calendars of coming events and records of past events. They included holidays, phases of the moon, and significant dates that related to the weather for the farming community. 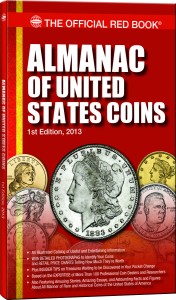 Having grown up with The World Almanac, reading the Central Intelligence Agency’s The World Fact Book, and being a begrudging fan of the Coin World Almanac, I was interested when Whitman Publishing sent out a notice that they just released the First Edition of the Almanac of United States Coins.

Although I read the description, I did not read it carefully because when I opened the package sent to me by Whitman, I found a skinny trade paperback-sized book. I reread the Whitman press release and it said the book was 192 pages. Initially, I felt disappointed in my hopes that there would be a competitor on the market to the Coin World Almanac since competition makes everyone better. So I can get over my initial reaction, I put the book down for a while to overcome my initial reaction to give the book a fair review.

Coin World does not have to worry about competition from Whitman. For as much as Whitman has invested in creating content across their “Official Red Book Series” from the many great authors, their Almanac of United States Coins is so lacking in content that it is many years away from being able to compete.

The only complement I can offer Whitman for this book is that many of the coin images are superb. I do like the images showing the relative grading of the individual series but wish it was expanded to include a few more grades. One example that would help collectors is that the difference between a VF-20 and MS-65 Walking Liberty half dollar is so vast, that having at least two intermediate grades (e.g., EF-40 and AU-50) would be helpful. 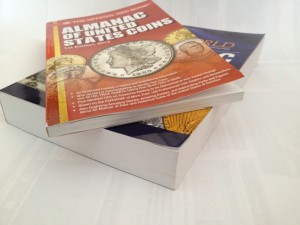 If had had to compare the Almanac of United States Coins, I would call it a light version of A Guide Book of United States Type Coins. The problem is that the Type Coins guide book, now in its second edition, is a better book even though it is not an almanac.

Whitman is going to have to learn that every numismatic reference book does not have to be a price guide. If they want to include type set-like guides, then do not make it look like a major component of the book. Otherwise, I would recommend people read A Guide Book of United States Type Coins instead. Thus the first improvement I would make is either eliminate the price guide information or find a way to minimize it as a central focus of each section. After all, an almanac is supposed to be about the content and the fact. Price guides are opinions that change with market forces that changes from the end of the editorial cycle until the book is published.

I know Whitman wants to sell books and has to find a way to make this book unique over their other offerings so they do not cannibalize sales, but they have to consider that they may never sell some of these books to certain people anyway. And if Whitman drops the pricing information, that still leaves their other books as an option for the reader. After all, Whitman can include a line at the end of each coin’s section that if they want in-depth information, the read can “consult” Whitman’s other book on the coin.

It is interesting how Whitman included a list of the authors for all of their books as credits but did not print the name of the editor of this book. However, Whitman’s press release named publisher Dennis Tucker as the editor.

Now that Whitman has disappointed me, they need to look at the content they have already invested in with their current books. They can start by taking whatever information is in the Red Book (A Guide Book of United States Coins), the Red Book Professional Edition, and the Blue Book (Handbook of United States Coins) and bring the content together to improve the current almanac. Just doing this would greatly improve this book. Then, it is a matter of an editor either convincing Whitman’s other authors to build on the chapters or distill the information in their other books to something suitable for an almanac.

I really wanted to like this book to the point that I put it aside in order to see if I could get over my first impression. Instead, I started to read another Whitman book that deserves the good review I will write in the near future. But I could not get over the disappointment. The text has no depth, facts that should be in an almanac are missing, and it seems like a glorified coin type price guide. Maybe they should market this as something for the very beginner, even for someone under the age of 12. Therefore I give this book a grade of F-12. The only factor that prevents this book from grading lower are the images. It is not a book I can recommend.

DISCLOSURE: Whitman Publishing provided the copy of the book I reviewed. I will not add this book to the library. It will be donated to my coin club’s annual charity auction in December with the proceeds going to the local Boys and Girls Club.