POLL: Will you buy this year’s commemoratives?

Now that we are in our third month of 2013, the U.S. Mint has begun to sell the 2013 Girl Scouts of the USA Centennial Silver Dollar. The 38mm 90-percent silver coins includes a $10 surcharge that will “be paid to the Girl Scouts of the United States of America to be made available for Girl Scout program development and delivery.” With a mintage limit of 350,000, the Girl Scouts will receive $3.5 million from the program. That’s a lot of http://www.girlscouts.org/program/gs_cookies/! 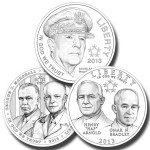 On March 21, the U.S. Mint is scheduled to start selling the 2013 5-Star Generals Commemorative Coins. The program commemorates the United States Army Command and General Staff College (CGSC) by commemorating the 5-star generals who attended or taught at the college. The generals that will be depicted on the coins are Douglas MacArthur, George C. Marshall, Henry “Hap” Arnold, Dwight D. Eisenhower, and Omar N. Bradley. General Bradley was the last to hold the rank General of the Army.

The 5-Star Generals Commemorative Program includes a $5 gold coin, silver dollar, and clad half-dollar that will be offered in proof and uncirculated options. The U.S. Mint will also offer a three-coin proof set. Surcharges of $35 for each gold coin, $10 for each silver coin and $5 for each clad coin sold will to go the CGSC Foundation to support the college. With mintage limits of the 100,000 for the gold coin, 500,000 silver dollars, and 750,000 clad half-dollars, the program can raise a maximum of $16 million for the CGSC Foundation.

Do you plan to buy any of the 2013 commemorative coins?