When I returned to the hobby, the first show I attended was the Baltimore Coin Show. Back then, it was privately run by an area dealer who grew the show to something that required a facility the size of the Baltimore Convention Center to hold for a twice per year show. I remember walking into the hall at the time and being overwhelmed with the rows of tables and starting my adventure. Even when the show occupied only Halls A and B was really a sight to see.

Then Whitman bought the show and propelled it to levels greater than its previous owner, which did not seem possible. Not only has Whitman done a great job, but they expanded the show to three times per year and expanded the number of dealers to include Hall C. Hall C also includes Whitman’s own booth along with providing space for a Kids Corner, exhibits, services, and some numismatic organizations. In many ways the size and scope exceeds last summer’s World’s Fair of Money in Philadelphia. 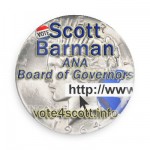 I arrived at the Baltimore Convention Center mid-afternoon on the Ides of March to take in the show and meet with my fellow board members of the Maryland State Numismatic Association for a scheduled meeting. Before the meeting I was able to get through about a quarter of the bourse talking with people and handing out my new buttons for my campaign.

Since the MSNA president could not get away from work, I presided as the organization’s vice president. I kept the meeting under 45 minutes while still getting a few things done. We set a new meeting, adjourned, then went to the elevator for the two floor descent to the main level and the bourse.

I did not buy much at this show since I did not take my usual inventory before going. I did look for New York-related tokens and medals and for Maryland colonial currency. But I did not find anything that intrigued me.

Later in the day, I did go by the table of Butternut Coins and COL Steve Ellsworth. This is not the first time I have spoken the Steve but every time I do I find him a very intriguing and engaging person. Ellsworth is a specialist in Early American Copper Coin along and the Civil War. It was his expertise in Early American Coppers that I was interested in.

As I was looking through his cases, I told Steve about my One Page Collection idea where I would fill a single 20 coin pocket page with nice coins for around $50-100. Since I posted it, I wanted to put the collection together and plan to talk about it at the upcoming National Money Show in New Orleans. He gave me suggestions as to what to look for based on my price and condition guidelines and found two coins that will be added to the collection. 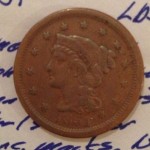 The first coin I found was an 1851 Braided Head large cent that his holder has marked as VF30. It is not a rare coin but a nicely preserve coin with a smooth brown color, nice details still remaining, very clear “Liberty” in the headband, and the signs of slightly weak strike on the reverse that does not detract from the look of the coin. 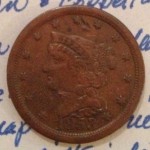 The other coin is a 1853 Braided Hair half cent that his holder has marked VF35. Again, this is not a rare coin but one that is really beautiful. The coin shows some streaks of red and I asked whether it might have been cleaned at one time. Remember, it was a common and acceptable practice to clean coins to bring out their shine and color. But Steve did not think so and that the streaks of color may be original toning. Even if the coin is naturally recolored from a previous cleaning, the coloring does not detract from the beauty of the coin.

Both coins were well within budget and will be included in my one page collection. I appreciate the help that Steve provided in my search.

Now that I decided to present these ideas at a Money Talks program in New Orleans, you will have to come to the show to hear about different ideas I have.

In the mean time, if you are in, near, or can get to Baltimore on June 20-23, it is a good way to spend a day or even the weekend. And let me know, we can sit down for coffee at the stand on the third level.