A few weeks ago, I wrote about a one page collection starting with the one cent coin. The set also included an example of a half-cent to cover the lowest denomination of coins produced by the U.S. Mint.

The concept of the one-page collection is to create a meaningful collection using a single 20 pocket page that holds 2×2 holders. Using this format, I can create any type of collection without being bound to the albums and folders that are published by the numismatic press. I can also personalize the collection with information I find and other stories, some that I write.

When creating a one page collection, I am looking at ungraded coins that could be graded Fine or better and costs under $100 each. While I try to keep purchases under $50, having the ability to go over for certain coins gives me a little flexibility while staying closer to affordable.

I was asked what I used as a price guide to determine affordability. For full disclosure, I had been consulting the NumisMedia Online Fair Market Value Price Guide of collector coin. The site is free, updated monthly, and is the same information printed in their monthly publication. The NumisMedia Online Dealer Price Guide as well as their printed version requires a subscription.

Since my first one-pager was of the lowest denominations, I will move up a bit and put together a collection of 2, 3, and 5-cent coins.

The first coin struck by the newly created Mint was the half disme in 1794. As one of the original coins designated by the Coinage Act of 1792, legend has it that the coins were struck using silver donated by Martha Washington. Although there is no proof that our first First Lady donated her silver, it makes for a good story.

The first half-dismes were really not struck for circulation but over 86,000 coins of the 20.8 grains (1.35 grams) of .8924 fine silver were delivered to Secretary of State Thomas Jefferson (under the First Coinage Act, the Mint was placed under the Department of State). Originally designed by Robert Scot, the early Flowing Hair and Draped Bust half-dimes (the “s” was dropped in 1796 since it was silent anyway). Production ceased in 1805 with the shortage of silver.

Production picked up again in 1829 with the Capped Bust design by William Kneass and continued until 1837. After the passage of the Act of January 18, 1837, the weight of the coin was reduced to 20 5/8 grains (1.34 grams) and the fineness raised to .900 silver. For this change, Christian Gobrecht’s Seated Liberty design was used for the new coin.

This is where the series gets interesting. First, there was a change in design in 1838 to add stars to the obverse. In 1853, to show that the size and weight was change, arrows were added to the date from 1853 through 1855 before being removed in 1856 when the weight was returned to the old standard. In 1860, the legend was move to the obverse replacing the stars and the reverse laurel leaves were made larger.

The silver half-dime was made through 1874 after the successful release of the copper-nickel coin we call the Shield nickel. Nobody is sure when the coin started to be called a nickel, especially since it is made of only 25-percent nickel. It has been speculated that it was called a “nickel” because of the composition while it circulated along side the silver half-dime.

The U.S. nickel is unique in that it is the only coin that has been made of the same .750 copper and .250 nickel composition since its introduction in 1866 except for the silver alloy used during World War II from 1942-1945. 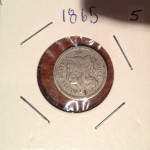 Starting this collection with an easy to find 1865 3¢ Nickel

Two and three cent coins were conceived out of the coin shortages during the mid-19th century. The three-cent coin, nicknamed the trime, was conceived in 1851 for better handling by the post office for buying postage. The silver three-cent coin was struck between 1851 and 1873. However, when silver became expensive and people were hoarding the coins for their silver content, congress authorized the striking of copper-nickel three-cent coins where were called to as three-cent nickels. Mint engraver James B. Longacre designed both coins that used a Roman numeral “III” on the reverse.

During the Civil War, the silver shortage caused hoarding of coins. The only circulating coins were the copper large cents. In order to produce more coins that would circulate, congress passed the Coinage Act of 1864 that eliminated the silver half-dime, the silver three-cent piece (trime), and authorized the production of the bronze two-cent coin. The Longacre-designed coin featured a shield on the front and the denomination “2 CENTS” on the reverse between two wheat stalks.

Beginning with the Liberty Head “V” nickel, most of the coins should be easy to find and not cost a lot of money. In fact, it may be easier to find an 1883 Liberty Head nickel without the “CENTS” on the reverse, also called the Racketeer Nickel, than an 1883 nickel with the “CENTS” in Fine to Very Fine grades. It may be easier to find a 20th century version that would fit this collection nicely.

For the rest of the series, you can find nice coins at all grades without problems. Just be aware of the major varieties, such as the two types of Buffalo nickels, and the modern changes in the Jefferson nickel. It should be fun to complete this set:

An interesting aspect of this collection is that the coins are of all the basic metals used in non-gold coins. The 2-cent pieces were made from copper while the 3-cent coins had one type made in silver and anther in nickel. While most of the 5-cent coins were made of copper-nickel, the wartime composition removed the nickel and lowered the copper content by adding silver and manganese. It is a good representation of coinage metals circulating in the United States.

This is one set where it was difficult to think about how to keep it to 20 coins. Depending on where you shop, your patience, and your budget, this is a collection that can easily be expanded.

If you decide to use this guideline for your set, do not limit yourself to my suggestions. Consider other options. Consider adding another page. Make it personal. Make it yours.

Most importantly: HAVE FUN!