Proof is in these coins

One of the most pleasantly surprising find at the National Money Show in New Orleans was at the U.S. Mint booth. On the right side of the booth, almost in the middle of the floor, was a single display case with a sign that read “Upcoming Products.” In the case was an example of the 2013 American Eagle West Point Two-Coin Silver Set.

The U.S. Mint began its four week sale period on May 9, 2013, the first day of the National Money Show. All orders are being taken via their website or by telephone at 800-USA-MINT (800-872-6468). The two coin set with one American Eagle Silver Reverse Proof Coin and one “enhanced” American Eagle Silver Uncirculated Coin minted at the United States Mint at West Point. Selling price is $139.95 with shipping to begin on September 30. 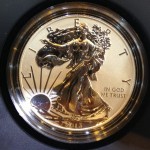 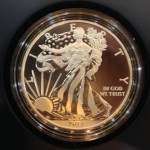 What made the set stand out what the U.S. Mint calls the “enhanced uncirculated” coin. While it looks like a proof coin, the enhanced portion are the selective frosting of elements. Introduced earlier this year, the new laser frosting technique allows the U.S. Mint to selectively apply the frosting texture to areas of the dies in a matter that leaves fine details of the coins. For the enhanced American Silver Eagles, the selective frosting leaves the folds of Miss Liberty’s skirt mirrored and is used to show off the flag she is holding. Adolph A. Weinman’s Walking Liberty image is one of the best designs every to appear on a U.S. coin. Enhancing it in this manner just makes it pop in a way Weinman could never imagine.

Even if you are “board” with the reverse proof, the set it worth purchasing just for the enhanced uncirculated coin. You will not be disappointed.

But the coin that really caught my eye was on the right side of the case. A 2013 Reverse Proof American Buffalo 24-Karat gold coin. Previously unannounced, it did not get noticed until I posted one of the first pins on Pinterest. After, it seem that the story spread around the numismatic press.

According to the U.S. Mint representatives at the show, the gold coin that was first issued in 2006 featuring the 1913 Type 1 Buffalo Nickel, will celebrate the 100th anniversary of the design by James Earle Fraser. 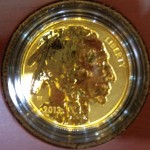 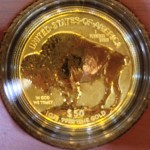 As striking other reverse proof coins have been, the American Buffalo gold coin is just as striking. It could be called just plain beautiful. Aside from being my second favorite coin design behind Weinman’s Walking Liberty, it makes a big impression as a reverse proof coin.

Since the coin has not been issued, the price has not been set. Since the price is based on the market price of gold, and considering that gold closed today (May 16) at $1,395.05 per troy ounce, and using the United States Mint 2013 Pricing of Numismatic and Commemorative Gold and Platinum Products [PDF] for the regular American Buffalo gold proof coin, the coin would cost $1,740. If the price of gold continues to go down, of course the sales price will go down.

Both coins bring the U.S. Mint back into the forefront of numismatic art. These coins use the best coin designs and brings them to a new level while keeping with their classic elegance without the gimmickry of color, embedded stones, odd shapes, or any combination of extras to sell non-circulating legal tender coins at an inflated price. It would be wonderful if the U.S. Mint could use these processes to enhance future designs. Both coins should be in the running for Coin of the Year honors when they are selected next year (and awarded in 2015).