COINS Act Briefing on the Hill 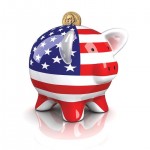 At noon today, the Council for Citizens Against Government Waste and the Dollar Coin Alliance is hosting a briefing for member of congress, their staff, and anyone else interested in support of S. 1105 the Currency Optimization, Innovation, and National Savings (COINS) Act.

The bill was introduced by Sen. Tom Harkin (D-IA) and co-sponsored by Sens. John McCain (R-AZ), Tom Coburn (R-OK), Mike Enzi (R-WY) and Mark Udall (D-CO). It supports the GAO reports that suggest the potential savings of using the coin over paper will be $13 billion.

If you are in the Washington, DC area and what to talk about the COINS Act, the briefing will be held a noon at the Russell Senate Office Building in Room 385. Attending the briefing for the Council for Citizens Against Government Waste and The Dollar Coin Alliance:

If you cannot attend the briefing, take the opportunity to contact your senators to let them know how you feel about the bill.