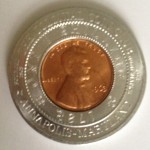 Encased cent given to attendees to the Colonial Coin Club’s 50th Anniversary celebration.

Sometimes it is fun serving as an officer for a coin club or a regional organization. The past week I had the honor to represent the Maryland State Numismatic Association as its vice president at the 50th anniversary celebration of the Colonial Coin Club of Annapolis, Maryland.

With my busy schedule, not only did I welcome the one night diversion to join the celebration at a nice restaurant in Gambrils, Maryland, but I had a chance to speak to congratulate them, encourage them to continue their good work for the next 50 years and beyond, and invite them to participate with the state organization and to visit the club I am president of, the Montgomery County Coin Club.

Colonial Coin Club has quite a history serving collectors in the eastern part of Maryland. Although Baltimore may be Maryland’s largest city, the areas around the Chesapeake Bay is the birthplace of the original Maryland colony. Although the Calvert family settled into what we now know as Baltimore, Annapolis was the colony’s economic hub. Amongst Annapolis’s residents was Jonas Green who became the colony’s official printer. Green served as an apprentice and worked for Benjamin Franklin in Philadelphia.

Green died in 1767 around the time that the colonial government was issuing its first currency. Taking over the printing business was his wife Anne Catherine Green making her the first woman to publish a newspaper in the colonies. Because of the social stigmas against women in these types of position, she printed her name as A.C. Green. 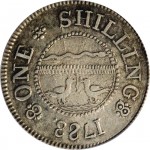 Drawing on the history of the Maryland colony, the Colonial Coin Club uses the 1783 John Chalmers shilling as part of its logo. Chalmers, who was a silversmith by trade, served as a captain in the Continental Army, was a representative to the common council of Annapolis, and was once the sheriff of Baltimore. As a civic-minded entrepreneur, Chalmers seized on the new law in Maryland that ended the practice of issuing paper money and the shortage of specie to propose a new coinage system. Chalmers created several prototypes that included the one shilling, three pence, and six pence coins. Chalmers’ shilling became the most famous of the his coins.

The design of the Chalmers Shilling has been a matter of debate. Several references call the long animal depicted a worm while others call it a snake and the two birds as doves. Some claim the birds are fighting over the worm/snake and there is no speculation as to why the worm/snake is depicted over a hedge. If you consider Maryland’s history at the time, snakes were not as prevalent in the Annapolis area. Birds would be going after worms and the two birds, which could be doves, are not fighting but sharing the worm—a symbol of Chalmers trying to tell people to get along during the tense period of transition from being British subjects to a free country. Considering that the coins were designed by Thomas Sparrow, who also designed the Maryland currency when it was issued, The worm over the head was to show unity across the Maryland fields.

If nothing else, I am adding the speculation as to the meaning of the coin.

As part of the celebration, the club put together a nice book of their history with articles from their journals, members, press clippings, and images that also makes is a really nice modern scrapbook of the club. It is an impressive bit of work by Betty Meck, a past president of the club, with help from their current Secretary, club historian, and the member with the longest service to the club Hank Schab. Both of whom I had a pleasure to meet and want to make special note of their contributions.

Also attending was Will Mumford. Will is a past president of the Colonial Coin Club and archivist for the Maryland State Archives who wrote, Barter, Bits, Bills and Tobacco: The Story of Money in Early Maryland. Will also wrote Strawberries, Peas, and Beans about the Pickers Checks in Anne Arundel County.

For a good overview of picker checks, you can read Picker Checks, Currency of the crops [PDF] by Gilbert Sandler from the University of Baltimore archives.

Finally, I would like to thank Colonial Coin Club President Rod Frederick for inviting the Maryland State Numismatic Association to participate which allowed me to be there as their representative. I will be 103 when the club celebrates a century of serving the coin collectors of the Annapolis area. I hope they will invite me back to celebrate with them!

A few images of the Colonial Coin Club’s 50th Anniversary history and album:

Chalmers Shilling image courtesy of Heritage Auction Galleries. Coin is from the January 2008 FUN Auction in Orlando and sold for $13,800 (including buyer’s premium).