Amongst my activities for the last month has been cleaning off the top of my desk. While for some this may be an easy project, for me it is a major proposition. One of the reasons is that the way I work can be best classified as “organized chaos.” Organized chaos builds piles of like items until there is no room. Rather than clean up the piles, priority items are reordered and piled on top of items that may not be needed until later. This keeps going until the desktop becomes unorganized as the piles get shifted looking for something that became buried. At some point the organization goes away and all that is left is the chaos. Finally, the day comes when a critical item can no longer be found.

I have had people tell me that the best way to keep my organization under control is to deal with the item right away. For some reason, I get attached to ideas, concepts, and the objects that are associated with them. Everything gets saved until I do something with them or I am faced with the difficult decisions to make it a priority when I finally dig out of the chaos.

But the digging can be fun because at the bottom of the pile, when the top of the desk is finally rediscovered, are the small items that are the most fun. In my case, there are a lot of coins, medals, tokens, and other items that I thought would be cool or nice to resell. Just to have a little fun, I gathered up some of the numismatic trinkets and decided to share it with my readers. 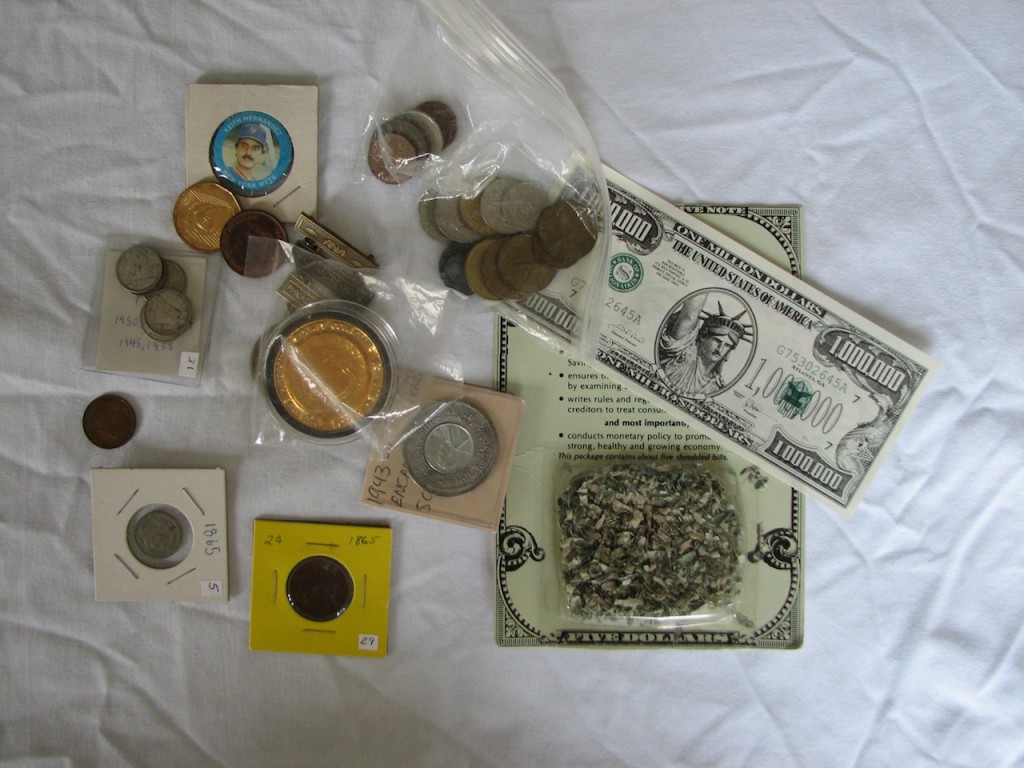 Some of the numismatic items found during my attempt to organize my chaos.

It looks like an eclectic little lot of stuff. I have a million dollar bill (talk about inflation money) sitting on top of a package of shredded currency that says has about $10 of chopped up notes, some Canadian money, and older U.S. coins. Those coins with the little numbered stickers were purchased at my coin club’s auction. There is a lot of five Canadian dimes, a copper 2-cent piece, and a nickel 3-cent coin. 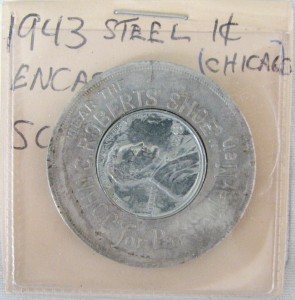 But some of these coins are a bit interesting. Let’s look at this encased steel cent. Up until I bought this coin from noted error dealer Fred Weinberg through eBay I had never seen an encased steel cent. The aluminum ring says “Wear the John C. Roberts Shoe” around the top and “For Particular Men” on the bottom. The reverse has the address of a store in Chicago, Illinois.

John C. Roberts was one of the founders of the Roberts, Johnson & Rand Shoe Company of St. Louis in 1898 as a wholesaler. The other founders were Jack Johnson, Oscar Johnson, and Edgar E. Rand. They were a competitor to Peters Shoe Company that was founded in 1836 but organized into a formal corporation under Missouri law in 1891 by Henry W. Peters. The Peters Shoe Company was a manufacturer and wholesaler.

International Shoe Company was once the world’s largest manufacturer of shoes with Red Goose shoes being its flagship brand. At one time, International Shoe Company owned Florsheim and Savage Shoes, Canada’s largest shoemaker. In 1966 the company changed its name to Interco and tried to become a conglomerate in apparel, footwear, and retailing. The company’s troubles began as it branched into furniture by buying Ethan Allen and Broyhill Furniture in 1980 as the furniture manufacturing was declining in the United States.

Eventually, Interco filed for Chapter 11 bankruptcy in 1991 and sold off all of its operations except for Broyhill, Lane, Converse (which it bought in 1986), and Florsheim. By 1994, the company sold Converse and Florsheim to exit the shoe business. The company was rebranded as Furniture Brands International 1996 after buying Thomasville Furniture. Now they only manufacture and sell furniture leaving collectors with these encased coins to raise our curiosity. 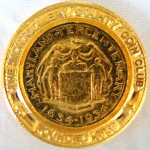 Obverse of Montgomery County Coin Club medal with standard logo that was gold plated for the 50th Anniversary. 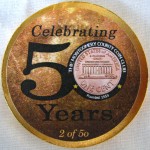 Reverse of the Montgomery County Coin Club medal with the special sticker commemorating the club’s 50th anniversary in 2009.

My next interesting find was my “gold” medal commemorating the 50th anniversary of the Montgomery County Coin Club in 2009. As president of the Montgomery County Coin Club, it was my job to help lead a celebration honoring our 50th anniversary. Since I was not a member for as long as others, I leaned heavily on longer tenured members for assistance. I believe the celebration went well.

To commemorate the occasion, we wanted a special medal but we did not want to spend a lot of money. Rather than buy new medals, we dipped into our ample supply of pewter medals and had them gold plated. On the back, I created a “50” logo that was similar to our regular logo that uses the reverse of the Maryland Tercentenary half-dollar but uses the reverse of the Lincoln Memorial cent that was released in 1959. That logo was added to a sticker and numbered. The club as #1 as a souvenir. Since I was the president, I was able to get #2. I just wish I made the background of that sticker a bit lighter. 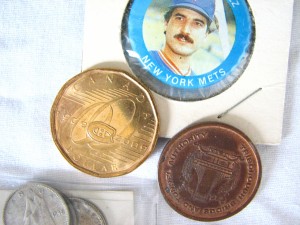 Sometimes there is just some loose stuff on the desk including a Canadian dollar commemorating the 100th anniversary of the Montreal Canadiens (they are a professional hockey team for those who do not follow hockey), a token from the Triborough Bridge and Tunnel Authority (TBTA) in New York City, a small set of Canadian dimes, and a Keith Hernandez “coin” from a 7-Eleven promotion in the mid-1980s. Hernandez was the Mets’ star first baseman when they won the 1986 World Series. Yes, I know he played for St. Louis before being traded to the Mets, but that is inconsequential to my collecting interests!

The TBTA token is interesting because it is smaller than the ones I used to use because it is for other tolls than the East River bridges. This token was primarily used on the Henry Hudson and the Marine Parkway (now Marine Parkway-Gil Hodges Memorial) Bridges where the tolls were cheaper. The larger tokens were used on the Triborough Bridge, Verrazono-Narrows Bridge, the Queens Midtown Tunnel, and other nearby crossings.

Finally, something that was purchased relatively recently but made it to the bottom of the pile are two coins I bought to start my one-page collection of 2-, 3-, and 5-cent coins. The week after writing about this in a blog post, the coins were available in my coin club’s monthly auction. Since I plan to put the set together, I bought these 1865 2-cent and 3-cent nickel coins to begin the question. But like a number of items that ended up buried on the surface of the desk, this is where that stopped. Now that I found the coins, I am going to make note of where I am in this collection and bring the list to the World’s Fair of Money in August to see if I can fill in the holes. In fact, I will probably work on completing my one-page cent collection, too. It’s not like I will have anything else to do!

There is more but if I do not stop now I am not going to be able to finish my cleaning!