What e-publishing means for the hobby

Since learning to program computers in 1976, I have been a proponent of technology and its positive effects on the progresses we have made in many areas of our lives. This technology has progressed things we can see like the automated teller machine, quicker checkouts at the grocery stores, smartphones, tablets, and even all the gizmos in your car. If I look at the iPhone in my pocket and compared it to the Poly 88 that I first programmed or the IBM 360 that I submitted punch cards to, it would be like trying to compare a Roman Denarius to an American Silver Eagle.

For those not olde enough to remember, this is a computer punch card!

A lot has happened in the world of technology. In the more than 35 years I have been doing this professionally, I have kept up, adapted, and even embraced new technologies looking for ways to enhance whatever I am doing. Not only have I worked to make technology accessible but in the last 25 years I have been working to keep it safe.

I love what technology has done to enhance many aspects of our lives. And you do not have to be a user of technology to have it affect the way you live. Computers help with inventory control to ensure store shelves are stocked; manage traffic control both in the air and on the ground; and generally make the behind-the-scenes management of a lot of things easier including maintenance on this blog.

Since my response to Dennis Tucker, Publisher of Whitman Publishing LLC, I have received a mix of private email notes about one phrase: calling physical books ‘Dead Tree Editions.” In the first two hours after the post appeared, I received more than two-dozen email notes running slightly in favor of physical books. As of Wednesday afternoon, the score was 17-15 in favor of real paper.

I do not know the demographics of those who did not volunteer the information, but based on the comments like, “I have been collecting for umpteen years…” or “I was a teenager when clad coins were just beginning…” it does not take much to get a general idea of demographics.

Of the 17 who responded that they prefer paper books over e-book, I am guessing that 12 are like me, members of the AARP demographic (50 and over).

However, contrary to what some have written, I am not a techno-snob!

Scott’s 1974 Plymouth Gold Duster. No computers in this baby!!
For more images of this car, click here.

My complaint is not with the preference but the availability of e-books that will allow me and everyone else to choose. I understand the need for choice because neither Whitman nor I will convince everyone to only read e-books.

However, if you look at the demographics of the ANA and its future, the next generation that are its future members, the so-called Generation X people, is the first generation of significant technology adapters and e-book readers. Gen X’ers are the first big wave of technology adapters who know of a connected world and have a vague memory of a world before Al Gore invented the Internet.

Right behind Generation X are the Millennials who grew up with the explosion of the Internet and probably have never read a newspaper cover-to-cover. While hobby publishers may have some time adjusting with Generation X, they will lose completely to the Millennials if they do not adapt.

Whitman is not the only publisher that needs to better examine its use of technology. Krause Publications is not much better. Where Whitman lacks in vision, Krasue lacks in execution. Rather than embrace electronic publishing that is friendly to e-readers, Krause and F+W Media, its parent, is holding onto the old-style by offering its products using Portable Document Format (PDF) rather than using formats that are friendlier to e-readers. 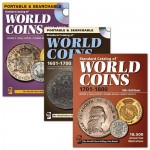 I have purchased the Krause Standard Catalogues and the various antique guides from F+W on CD or DVD because that is what is available. I use them as part of my hobby and my new professional life in the collectibles business, but I wish I had real e-reader formats so that I can use the tools to bookmark and make annotations.

Even the venerable Numismatic News has stuck its publishing toe in the e-publishing waters by making one edition electronic. However, instead of embracing the newsstand formats that would be friendly to an iPad or Kindle e-reader, they are mailing PDF layouts of this publication. I hope you have plenty of space in your Inbox.

It is not a demographic issue as it is a commitment to the hobby’s future. I am sure the people at Hemming’s Motor News have a similar problem with demographics as those faced by Whitman and F+W. If you read their publications, you will notice that their demographic skews to an older population. Yet, they have quietly embraced the technologies that some of their readers want while still publishing physical magazines. I recently subscribed to the digital version of Hemming’s Classic Car on my iPad and love it!

How could Hemming’s do this for the auto enthusiasts market but Whitman and F+W cannot do the same for numismatics?

Whitman and F+W have shown that they cannot be relied upon to be the leaders in producing the numismatic information in a way the future of the hobby will embrace. Since other markets have proven that it is possible to embrace technology to enhance the physical world, I can only emphasis my commitment to help the ANA build a better technology infrastructure because if we leave it to the market, they will fail the hobby.