What is with the Coin of the Year 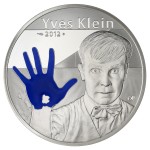 Last month, World Coin News announced that the 2014 Coin of the Year (COTY) would be awarded to the Monnaie de Paris (Paris Mint) for their commemorative coin honoring the artist Yves Klein. The silver coin features the artist’s hand colored in a striking blue on the silver coin. For those who are not familiar with Klein’s work, he is credited with starting the minimalist movement following World War II including paintings called monochromes which were exhibited in the late 1950s. Klein’s blue monochrome was the last work of the series.

This is not the first time that World Coin News has chosen a design with a gimmick for COTY. The 2013 COTY winner was 5 euro silver coin from the Royal Dutch Mint that featured a Quick Response (QR) code printed on the reverse. QR codes are squares of encoded information that can contain portable information such as messages, web addresses, and even address card information. When the QR code on the coin scanned, the decoded message pointed to a website that had a game in honor of the 100th anniversary (in 2011) of the current home of the Royal Dutch Mint. The website is still available and can be found at www.q5g.nl.

2010 Jonah In The Whale 2-New Sheqalim coin from Israel

The 2012 COTY winner was more artistic in nature when Israel won with the 2-New Sheqalim titled “Jonah in the Whale.” Part of the Israel Coins and Medals Corporation’s Biblical Art Coin Series, the coin depicts the prophet Jonah praying inside the belly of the whale after he was swallowed while fleeing the mission he was commanded to do by the Lord almighty. Rather than rely on gimmickry, the coin is an artistic interpretation of that famous biblical story.

Another artistic winner was the 2011 COTY from the South Africa Mint. Their winning coin was a gold, 1-ounce, 100 rand coin featuring the White Rhinoceros as the first coin in the South African Mint’s Natura “Safari through South Africa” series. The artistic rendering of the coin is something to really take notice and a worthy winner. 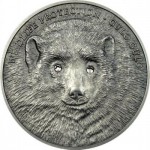 2008 Mongolia Wolverine with diamonds for eyes

But the 2010 COTY was one of the first gimmicks that awarded Mongolia the award for producing a silver 500-tugrik coin that depicts a wolverine with diamond eyes. While the eyes might be a striking design element, does it rise to the level of COTY?

Three of the last five COTY winners had design elements that were not based on the sculpture of the coin but on a design gimmick. Were these the best designs or did the gimmick influence the voting?

I have asked before whether it is wrong to include other design elements on a coin, especially non-circulating legal tender (NCLT) coins. When I ask these questions, I bring out the picture of my Somalia motorcycle or muscle car coins. I also like the Canadian 2006 Breast Cancer silver commemorative coin and the special 25-cent circulating coin the Royal Canadian Mint produced. These were not overt uses of color but almost an enhancement to emphasize the pink ribbons on the coins. 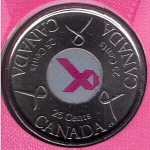 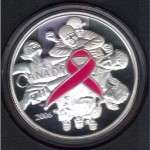 But is it too much of a gimmick? After the RCM produced those coins it seems that they dove in face first into producing colored coins. It also seems that the rest of the world also has been spending its time printing coins and not minting them (see the New Zealand Mint). Although I am guilty of buying into this type of design concept, there comes a time when the concept has gone too far. In television the concept is called “Jumping the Shark.”

While others are printing coins, the Royal Mint is coming up with designs that are interesting sculptures. In fact, if you go to their website and look at their offerings you will find that the Royal Mint has nice designs, interesting packaging, but no color. Although their artists take advantage of the design elements using bi-metallic coins, they are sculptured arts and not printed designs. 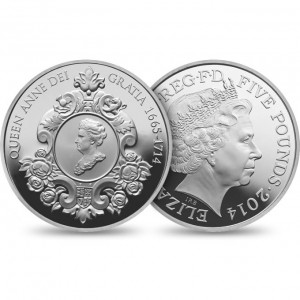 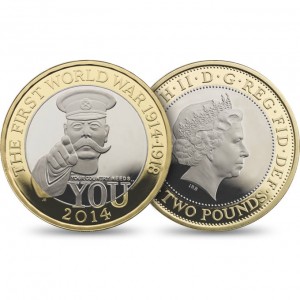 U.S. coin designs have had the best designs over the last few years. However, the introduction of the “enhanced uncirculated” coins with the selective frosting has opened up new ways of enhancing sculpture elements on coins. It would be interesting to see what the U.S. Mint artists can do if given the free hand to design coins and using the laser to enhance the design.

Given the recent history of the COTY competition, the 2014 National Baseball Hall of Fame commemorative coin is almost a shoo-in for 2016 COTY honors. While the elements will be sculpted rather than printed and the curved planchet will be interesting, it is probably enough of a gimmick to sway the World Coin News confab when it meets to discuss the 2014 coin in December 2015.

As an aside, why do we have to wait a year for the COTY competition? With technology what it is today, why does it take a year to do the COTY competition? If the award is given in February, then why select the COTY in December or January? Does it really make sense for the 2014 COTY to be coins date 2012? Why not call it the 2012 COTY since the coins are dated 2012 and award them at the beginning of 2013—or in this case, the 2013 COTY being awarded in 2014?

The one year delay might have made sense when mail delivery was less reliable and information was delayed by the speed of the teletype and the printing press. In the information age where 2012 is not only yesterday’s news it is ancient history, it is time for Krause Publications and World Coin News to modernize their process and come up with something a little quicker than a one year delay.