Having Fun with numismatics and learning without coins

If education is a lifelong project, then numismatics is the perfect vehicle for continuing education. If you are only collecting the metal, the plastic surrounding the metal, or the paper without understanding the stories behind them, then you are missing the richness of the story behind those objects. These stories makes those coins, paper, medals, and tokens come alive.

Let’s take the story of some paper, but not just any paper. This paper are of stock certificates of companies gone by. But not just any companies. These are railroads that are featured on the board game Monopoly.

The railroads in the game are based on real railroads that had an effect on Atlantic City, New Jersey in one form or another. The Reading Railroad and Pennsylvania Railroad served Atlantic City. Although the Baltimore and Ohio (B&O) Railroad did not serve Atlantic City, it was a major feeder railroad to both the Reading and B&O.

But the game has one railroad, the “Short Line” which was claimed to never exist but was a combination of rail lines. But that story bothered me, so I went on a search for what was the real Short Line Railroad.

After several web searches and reading various references, I was lead to the book Monopoly: The World’s Most Famous Game And How It Got That Way by Philip E. Orbanes. According to many, it is the definitive book about Monopoly.

I purchased the book and learned that the Short Line was really a railroad. Well, it was actually the shortened name of a service called the Shore Fast Line, an electric streetcar that ran between Atlantic City and Ocean City. It was one of such short rail services operated by a company named the Atlantic City and Shore Railroad.

The railroad was founded in 1906 when the West Jersey and Seashore Railroad electrified their main line with the financial help of the Stern and Silverman Syndicate. The new company was chartered as the Atlantic City and Shore Railroad. Although the first cars began to run in 1906, the full line became operational in 1907. The company was dissolved in 1945 after its sale to the Atlantic City Transportation Company, who were buying the small railroads in New Jersey. The new company continued to operate the Shore Fast Line until 1948. Atlantic City Transportation Company stopped running all trains in 1955. They continued to operate busses until 1985 when New Jersey Transit took over the service.

Numismatists who collect scripophilly (the study and collection of stock and bond certificates) who knew about the B&O, Pennsylvania, and Reading railroads and wanted to create a Monopoly collection can start to look for the stock certificate of the Atlantic City and Shore Railroad to properly complete the set. The problem is that the stock certificate for the Atlantic City and Shore Railroad is rare as compared to the other three meaning it can cost significantly more to obtain.

I found an unissued stock certificate for the Atlantic City and Shore Railroad at the site for George H. LaBarre Galleries, Inc., a company in Hollis, New Hampshire. For such a rare stock certificate in excellent condition, the $75 price tag seems reasonable. LaBarre also sells the “Monopoly Game Board Set” with the B&O, Pennsylvania, and Reading Railroad stock certificates.

With all four certificates, you can add the cards from a real Monopoly game, $200 in Monopoly money for each, plus $200 for the rent that would have to be paid if someone landed on your railroad. You should also find the “Take a Ride on the Reading” and “Advance token to the nearest Railraod and pay owner Twice the Retal…” cards. Put it all together in a frame and hang it in your game room. 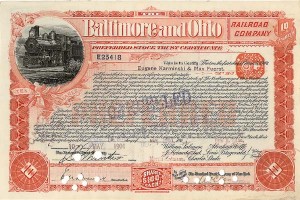 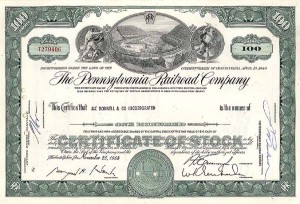 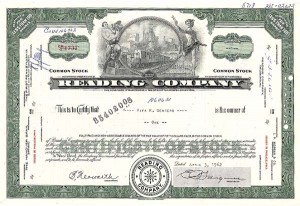 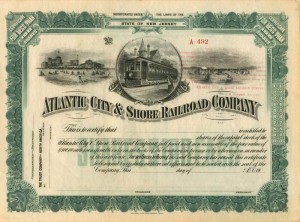 And with that, you can have a lot of fun with the part of numismatics known as scripophilly!

I have no connection with George H. LaBarre Galleries. Since I am using their images, I think it is only fair to give the company credit and, hopefully, steer some business their way. So if you are interested in these or other scripophilly items, shop their online catalog!