Operation Overlord was the largest amphibious invasion in history.

Originally scheduled on May 1, it was rescheduled to June 5 and then June 6 because of weather.

Across 50 miles of Normandy coast line, the United States forces were assigned Utah and Omaha beaches, the British Army was assigned to Gold and Sword beaches, and the Canadian Army invaded Juno beach.

Operation Bodyguard created six decoy invasions as a distraction to the Germans so as to divert their attention from the intended invasion at Normandy. Gen. George S. Patton, considered the most skillful tank commander in U.S. military history, commanded a fake mission to invade Pas-De-Calais.

Omaha Beach was the focus of the attack because it was the most heavily defended beach.

On the first day, 4,414 Allied soldiers were confirmed dead.

Victory was declared on July 21, 1944 when the Allied forces captured Caen, one of the major objectives of the invasion.

The Normandy American Cemetery in Colleville-Sur-Mer is the final resting place for 9,387 Americans. Across its 172.5 acres sits 9,238 crosses and 149 Stars of David where 41 sets of brothers and 3 Medal of Honor recipients rest. The Walls of the Missing is engraved with the names of 1,557 soldiers missing in action.

On this, the 70th Anniversary of D-Day, the day Operation Overlord began, there is one more statistic that should not exist:


The number of commemorative coins issued by the United States to honor those that served and gave their lives to help begin the liberation of Europe from the worst criminal of all time: ZERO!
Although the U.S. Mint did issue a World War II 50th Anniversary commemorative coin in 1995, this country should honor those who participated in the largest amphibious invasion in history and set the world on a safer course.

With the number of veterans of that day dwindling as they are all nonagenarians, I would like to thank them for their service and the families of the fallen for their service. I only wish that congress would realize that their bickering over nonsense with flags on their lapels pales in comparison to the sacrifices made on that day in France. They just do not get it. 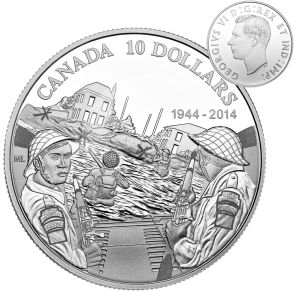 Canadian $10 Commemorative of the 70th Anniversary of D-Day featuring the obverse portrait of King George VI, the reigning monarch at the time of the invasion. 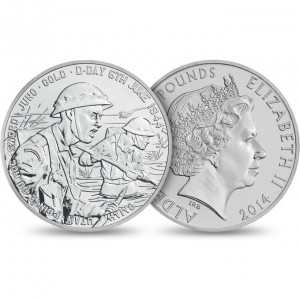 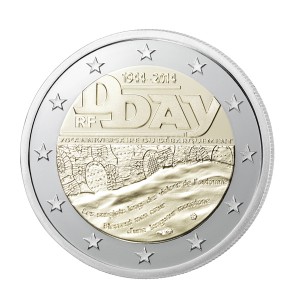 Reference: D-Day by the Numbers from the History Channel
Coin images courtesy of the Royal Canadian Mint, Royal Mint, and Monnaie de Paris.