Since my post about the Citizens Coinage Advisory Committee meeting on Tuesday, July 22, 2014, I had a few readers suggest that my interpretation of the meeting may not be accurate. Several mentioned that the discussion was a follow up of the April meeting where these issues were initially discussed. It was also pointed out to me that as part of the meeting CCAC Chairman Gary Marks did try to explain the conversation in context.

These are fair criticisms. I did not attend the April meeting and Chairman Marks provided good introductory explanations prior to the discussion. Before commenting, I should have looked at the previous meeting’s notes which are available on the CCAC website. In retrospect, my criticism about the program was probably not fair. However, it is fair to question the direction the CCAC is proposing.

The other criticism that I will alter but not retract is the one when I said there was an “over-the-top cult-like patriotic gushing by some of the members over the proceedings.” Rather, what I should have said is that the CCAC was very full of themselves to the point of being too self-congratulatory and overblowing the self-perceived importance of what is being proposed.

What is being proposed is a medals program that Marks tentatively called an “American Liberty Silver Medal Program.” The purpose would be for the U.S. Mint to produce modern images of Liberty in medal form. Medals produced under this program would be dated silver proof medals on similar one-ounce planchets that are used for the American Silver Eagle program.

A second program would be a “freestyle medal of an American theme.” The U.S. Mint would solicit ideas from their artist/engravers to be reviewed by the CCAC. One freestyle medal would be produced each year. As part of the proposal, it was suggested that the medals also be produced in bronze to make them more accessible to the average collector.

What is important is that these are proposals for medals and not coins. Medals can be made of any metal and be dated but they will not bear a denomination and would not be legal tender. 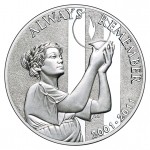 How would the U.S. Mint and the CCAC measure the success of these programs? Will collectors really accept these medals as numismatic collectibles? If the 2011 September 11 National Medal is used as a benchmark, the U.S. Mint sold 177,339 medals from a maximum mintage of 2 million over two years. Think about it: a national tragedy that is relatively recent in the memory of Americans with the proceeds going to construction of the 9/11 Memorial in New York sold less than 9-percent of its allowable mintage. In comparison, the legal tender 2012 Star-Spangled Banner Silver Commemorative silver dollar sold 210,751 from its release on March 5, 2012 through the end of the calendar year.

What prevented the sales of the September 11 National Medal? It cannot be the design because most people believe it is one of the best medals ever to be produced by the U.S. Mint. Could it be the price? The medal was priced at $66 with a $10 premium to be paid to the museum. This was $10 more than price for the proof American Silver Eagle coin.

Although the September 11 National Medal was a beautiful work of art the price was not too out of line for a silver medal, the fact that it was a medal and not a coin most likely prevented it from being purchased in greater numbers. Even though a commemorative coin will not enter circulation, there may be a psychological barrier from a medal being accepted by collectors because it is not a legal tender coin.

I did not purchase one of these medals. Even though $10 would go to the museum, I opted to write a check as a donation rather than pay for the medal. Even though I like the design, the medal is not something I feel is right for my collection. In writing a check I was also able to use the donation as a charitable tax deduction, which I would not be allowed to do if I purchased the medal. I also do not have this piece of metal that might not resell with a numismatic premium when it comes time to divest my collection.

Reflecting on the meeting and the proposal, those that I corresponded with and I expressed a lot of skepticism that this program would be a success. Regardless of how beautiful the artwork, many believe these medals will not be as popular with the public as portrayed by the CCAC during the meeting.

In fact, if you listened to what members of the CCAC said, you would think that these medals would be the best thing to come out of the U.S. Mint since President Theodore Roosevelt’s “pet crime.” While I really do not want to assail Gary Marks, his remarks at the end of the meeting exemplify this extreme self-ingratiation:

I believe that this is the single most impactful idea that the mint can pursue at this point in time in the United States. With a medals programs such as this, finally, we can have the freedom to have the art come forward. Finally, liberty will be liberated

The committee is energized.

Overall, the CCAC was overly self-congratulatory for doing something that will arguably have the least impact on the collecting community. It was these types of statements from the members of the CCAC that prompted my comments on Tuesday.