In a normal world, the United States congress will pass twelve different budget bills by August or September in time for the beginning of the federal government’s fiscal year, which begins on October 1. Anyone who has followed congress over the last 20-or-more years knows that the world they live in is not normal. Rather than pass real budget bills, congress has learned the irresponsible habit of voting on continuing resolutions and omnibus funding bills.

A continuing resolution (CR) is a bill that says to take the previously passed budget and extend it to a specific date. CRs can either continue the spending or make certain adjustments, such as reducing spending by a percentage. Omnibus, from the Latin “for everything,” are bills that are loaded with every bit of budget information in one very long bill.

Within the Omnibus budget bill are provisions to provide funding for the government’s money manufacturing operations. But this is different type of bill. It is an omnibus spending bill that covers most of the government through the end of this fiscal year (September) and a CR for the Department of Homeland Security so that the new congress can fight with the president over other policy matters. Reporters have been calling this a CRomnibus bill—which should never be confused with a cronut which is a very sweet treat! According to NBC News:

And the Washington word of the week is: “Cromnibus.” It’s the love child of a “continuing resolution” (CR) and “ omnibus” spending bill, two inside-the-Beltway terms for measures Congress has approved to keep the government funded. 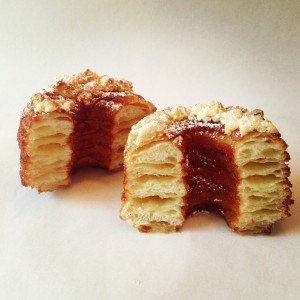 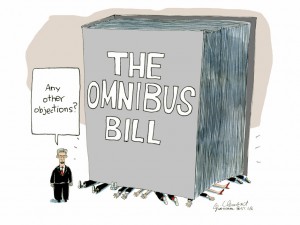 In the grand scheme of the U.S. federal government, $20 million is not a lot of money. However, it may be more than enough for the U.S. Mint to operate. According most fiscal year 2013 (FY13) annual report from the U.S. Mint, the latest report available when this is written, the U.S. Mint spent $11.89 million for FY13 and $12.03 million in FY12. If the cost cutting measures implemented by Deputy Director Richard Peterson this past year further reduces costs, the $20 million could be twice as much as the U.S. Mint needs to operate.

Appropriation for the Bureau of Engraving and Printing has a few different provisions. Although it does recognize that the BEP has what the bill calls an “industrial fund,” (31 U.S. Code § 5142), the bill does not place many limits on what the BEP can use. The bill says that the BEP cannot use the monies to redesign the $1 Federal Reserve Note making it the second oldest design used on U.S. money.

For double-extra brownie points, what is the oldest design used on U.S. money?

The other limit is that the BEP can use only up to $5,000 for “official reception and representation expenses.” Essentially, the BEP can only spend up to $5,000 for conferences and conference attendance. Does this mean that the BEP will not be at shows like the World’s Fair of Money because it would cost more than the $5,000 to bring their exhibit to Rosemont, Illinois next August? If the BEP does not attend the World’s Fair of Money or other shows, tell your representatives in congress that their short-sightedness is hurting the hobby!

Finally, the bill says that the money appropriated “may be used to consolidate any or all functions of the Bureau of Engraving and Printing and the United States Mint without the explicit approval of the House Committee on Financial Services; the Senate Committee on Banking, Housing, and Urban Affairs; and the Committees on Appropriations of the House of Representatives and the Senate.” In other words, if someone figures out that the BEP and U.S. Mint can become more efficient and further save money by combining certain functions they have to go to congress and ask for permission.

I wonder what congress would say if the BEP and U.S. Mint were to propose to consolidate their online and brick-and-mortar retail operations? Instead of two different operations, how much could be saved if these bureaus under the Department of the Treasury would have one fulfillment contractor or a combined storefront in their current locations?

Of course this is contingent on congress passing this budget. As I write this, the government is a few hours away from running out of money with no signs of being able to pass this bill. However, if the government shuts down the U.S. Mint and BEP will continue operating since they are self-funded organizations.

UPDATE: (12/12/14 00:45) The CRomnibus bill passed the House about 10:00 PM on Thursday but still needs to be passed by the Senate before it can be signed by the President into law. The House passed a stop-gap bill to give the Senate until this weekend to pass the CRomnibus bill. Crisis averted, but the money manufacturing process continues.

Image of the Cronut courtesy of Dominique Ansel Bakery, where it was invented.
Cartoon about the Omnibus bill is actually Canadian by Gary Clement and appeared in the National Post. Who cares if it’s Canadian. It’s fitting!