News from the U.S. Mint

A couple of quick news items that came out of the U.S. Mint on Tuesday. 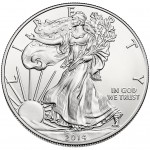 Taking a sample of five different bullion dealers, the average price is around $20 for one American Silver Eagle Bullion coin. If each coin is worth about $20 each, that means the U.S. Mint sold $857.28 million in silver bullion for 2014. Remember, this is for the bullion coin. This does not count the collectible versions such as the proof or the West Point struck uncirculated coin.

The other announcement was that the U.S. Mint will sell a new product, Coin Discovery Set — An Introduction to Coin Collecting. The set costing $24.95 will include three 2014 Kennedy Half-Dollars in three different finishes—proof, uncirculated and circulating. It will also include two coin tubes for quarters, a magnifying glass, cotton gloves, and a booklet that explains the coin production process. The box will the the size to store U.S. Mint proof sets.