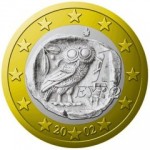 The debt crisis in Greece and their threat to drop the Euro as the unit of currency reminded me that this would present an interesting collectible opportunity.

Collecting numismatic items from distressed times can present an interesting challenge. While we have heard about Hard Times Tokens being a popular collectible, sales tax tokens produced during the Great Depression so that people could pay the exact fractions of a tax on low-value purchases.

Two of the more recent examples of numismatics based on distressed economic conditions are the Zimbabwe hyperinflation currency and the State of California’s Registered Warrants (IOUs). Although both have different origins from the Greek crisis, both show different ways of handling the situation.

When a country controls its own currency, it can manage that currency to maintain its value. In the United States, that is done by the Federal Reserve. It uses many programs from buying debt from its member banks to setting what it calls the Discount Rate, the rate that its member banks can borrow overnight to meet its liquidity requirements. In Zimbabwe, the central bank did not have the business and circulation in order to make this type of policy work because of the strife caused by wars and other ugliness. Their only choice was the print more money. The more money printed, the less it is worth. The less the money is worth the more it takes to buy daily goods and services. This result is that the more money that is added to the economy the higher inflation goes.

Zimbabwe gave us the hyper-inflated currency ranging from Z$10 to Z$100 trillion. It has become fun to own a note that makes you a billionaire or a trillionaire even though the actual value of the currency is worth less than the paper which it is printer. Since Zimbabwe has converted their system to the U.S. dollar, Zimbabweans will be converting the old inflation currency at the rate of Z$175 quadrillion (175,000,000,000,000,000) for US$5. An enterprising Zimbabwean could buy them for double and make more money selling the notes as souvenirs than converting them to U.S. dollars.

California was a different story. It was a self-made crisis of politics in 2009 between the Republican Governor Arnold Schwarzenegger and the Democratic-controlled legislature. Since neither side could agree on a budget, Schwarzenegger declared a fiscal emergency and ordered the printing of IOUs to pay for state debts.

Officially called Registered Warrants, the first of these IOUs were issued to pay personal tax refunds. They carried a 3.75-percent interest rate and were redeemable when the budget was passed or in early October, which ever came first. The crisis was averted when Schwarzenegger signed the budget on September 3 and redemption began on September 4. California State Comptroller’s Office stopped redeeming warrants as of November 10, 2010.

A friend who was living in California at the time was issued an IOU for a small personal tax refund. Rather than be burdened with the rigors of cashing the warrant, the paper is now part of his collection. However, since the warrants were addressed to specific people, it is not likely that these items will be immediately collectible. Many years from now it is probable that these warrants will be a curious collectible like the old Series E or War Bonds.

Greece does not control its own currency nor does it have any potential backing to issue warrants. Since Greece has not been seen as creditworthy, it cannot issue bonds at any interest rate because the markets are not interesting in buying Greek debt. Unless a deal can be struck with the rest of the European Union, Greece may not have a choice but exit the pact that uses the Euro as the common currency.

Exiting the Euro will bring back the Greek drachma. 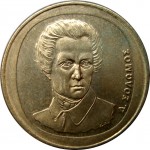 The return of the drachma would create three numismatic collectibles. One would be the Euro coins with the Greece-specific reverse, whatever the Greek government issues in the interim, and then the new drachma. This would not apply to euro currency since each denomination uses the same design throughout of the Eurozone.

Before you search your ten pound bag of foreign coins looking for pre-Euro drachma, it is likely that Greece will keep those coins demonetized and not recognize them as official currency. If Greece wants to be able to control the amount of currency in circulation, then they will have to issue new coins and notes.

If Greece goes this route, experts are saying that the Greek government will allow the Euro to circulate alongside whatever is added to the market. Some people think it may take over a year to strike enough coins and print enough notes to be able to remove the Euro from circulation.

What will Greece do in the interim? Does the Greece Central Bank issue warrants like California did? If so, will the warrants become something that would become a collectible? 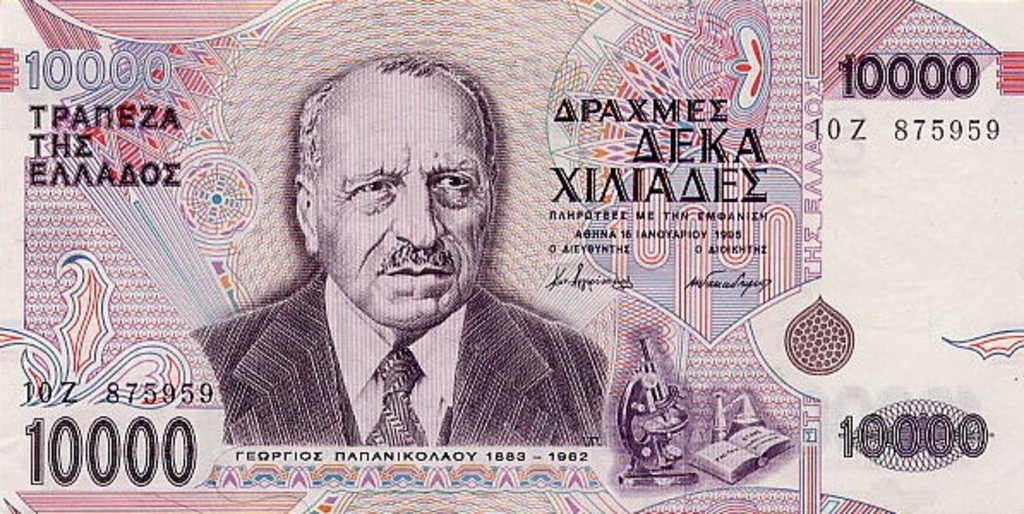 10,000 drachma note issued by the Bank of Greece in 1995 features the image of Dr. George Papanicolaou, inventor of the Pap smear