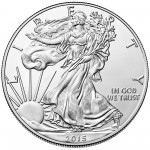 A few days later on November 18, the U.S. Mint announced that the one-tenth ounce American Eagle gold bullion coin has been sold out. For the year, the U.S. Mint produced 980,000 of the one-tenth ounce gold American Eagle proof coins representing 98,000 ounces of gold. This year’s production is a bit more than 73-percent increase over the 565,000 coins struck in 2014.

The day after announcing that they will be restricting the production of the American Silver Eagle bullion coins to 1 million coins per week, the U.S. Mint announced that they will continue to produce the coins through the week of December 7, 2015. They anticipate that this will cover their full weekly allocation through Monday, December 14, 2015.

With the price of silver dropping, the U.S. Mint has produced 42,929,500 American Silver Eagle bullion coins to this point. Considering the allocation of 1 million coins per week with four weeks left of sales, the final total of silver coins should be between 46-47 million coins. This would be an increase over last year’s record of 44,006,000.