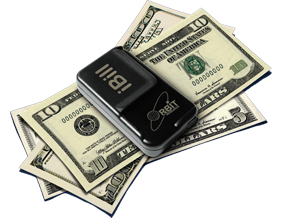 Earlier this week the Bureau of Engraving and Printing announced that in honor of Low Vision Awareness Month, blind or visually impaired persons can request a free iBill currency reader as part of the BEP Meaningful Access program.

The iBill currency reader is a product of Orbit Research. Retailing at $119.00, iBill is a pocket-sized reader that can identify all Federal Reserve Notes in circulation. Orbit Research claims that “most bills are identified in less than one second” and can announce “the denomination in a clear female voice; tone and vibration modes protect privacy.” It requires one AAA battery that is included.

The Meaningful Access Program came about as the result of a settlement between the government and the American Council of the Blind who brought suit claiming that U.S. currency violated Section 504 of the Rehabilitation Act. This was first confirmed by the courts in 2006 and subsequent appeals had judges requesting a settlement. Following the 2009 settlement, the BEP began to work on meaningful access programs.

One of their first attempts was EyeNote, an iPhone app the camera to scan the note and identify it in 2-4 seconds. Although slower than the iBill, it is a very capable app that will allow the visually impaired iPhone user to carry one less device.

According to the BEP Meaningful Access mobile application page, the BEP worked in collaboration with the Department of Education to have the IDEAL Currency Identifier that works on Android devices. This app can be found on the Google Play Store.

A more impressive app is the LookTel Money Reader available for iOS and the Mac. For the visually impaired traveler, not only can Money Reader recognize U.S. currency, but the currency of 20 other countries including the Australian Dollar, British Pound, Canadian Dollar, Euro, Indian Rupee, Japanese Yen, and Saudi Arabian Riyal. Money Reader is faster at identifying currency than EyeNote and can identify fragments, as I found in my last review.

If you think you, a relative, or someone you care for qualifies, download and fill out the simple form and send it to the BEP address on the form&rsqous instructions. It will take up to eight weeks for you to receive your free iBill currency reader.

As an aside, this is not a taxpayer funded venture. BEP earns its funding from their business operations. Most of their money is earned from printing money for Federal Reserve. They also earn a smaller amount of profit from sales to collectors.