Pounds, shillings, pence and the power of 12 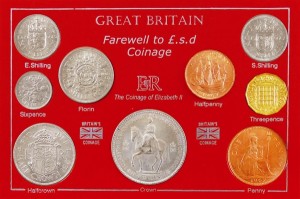 Collection of old pre-decimal coins from during the reign of Queen Elizabeth II.

As a collector of Maryland colonial currency, I was reading about the differences with exchange rates and the problems the colonies faced when they started to issue paper currency. While reading the references, the amounts did not make sense until I figured out the old British monetary system. Once that was figured out, it was easier to understand the disagreements between the colonies about the values each was expecting their currencies to maintain.

A very short, simplistic, and incomplete history begins with the Norman conquest of England by William the Conqueror. His invasion of England from Normandy on the northern shores of what is France today in September of 1066 and coronation on December 25, 1066, marks the birth of what would become England.

During the next nearly 50 years, William I (1066-87), William II (1087-1100), and Henry I (1100-35), most of the emphasis has been to finish the conquest and consolidate the ruling under the single crown. The Treaty of Alton (1102) and the subsequent conquest of Normandy (1106) was capable of consolidating power and allowed Henry to attempt to create a sustainable government. Insurgencies from Whales, Rebellion of 1115-20 and the crisis of succession, where is his wife Matilda had not conceived a child, did not allow Henry to finish his work by his death in 1135.

The pound symbol is a fancied “L” based on the Latin librae for weight or balance. It was intended that the 240 pence could be placed on a balance to weigh one pound sterling. The shilling, adapted from the Latin solidus, for solid, was the primary coin of commerce represented with an “s.” For the pence, it used the “d” from the Latin denarius, the smallest Roman coin. Multiple denominations are separated with a slash. For example, 1 shilling can be written as “1/-” while 2 shilling and 3 pence might be written as “2/3d.”

Henry I was succeeded by Stephen, the grandson of William I, with much contention. The problem was that Stephen’s younger brother, Henry of Blois, was embraced by Henry I and subsequently by the Normans. The subsequent civil war lead to a period called “The Anarchy” (1135-1154). During that time Stephen tried to continue with Henry’s reforms but was not able to hold on to the control of the government. Toward the end of his reign, Stephen recognized Henry as the heir to the throne.

With a peace treaty negotiated by Stephen, there was a new peace during the coronation of Henry II in 1154. During the peace, Henry II continued to consolidate power of Norman and Anjou (today this is northern France) and reconstructed the English government.

As part of his reconstruction, Henry II decided to base the currency on the troy pound. The troy pound was based on the Roman libra, which was the basis of weight that England accustomed with. In order to make the money more acceptable, it was divided into 20 units which were originally called testoons. Later, it was renamed as the shilling. As an attempt to make the testoon (shilling) the major unit of currency which corresponded to the Roman solidus. As the solidus was divided into 12 denarii, the testoon was divided further into 12 units with one called a penny and multiples called pence. This was to keep current with the current standard that a pound sterling weight 240 pennyweights.

To understand this system, I came up with the following table.

This was the system until Decimalization Day on February 15, 1971.

Today, British coins are divided into 100 pence to one pound. The coins struck for circulation by the Royal Mint are 1 Penny, 2 Pence, 5 Pence, 10 Pence, 20 Pence, 50 Pence or Half-Pound, £1 (pound), and £2. Paper currency is issued for denominations of £5 and greater. 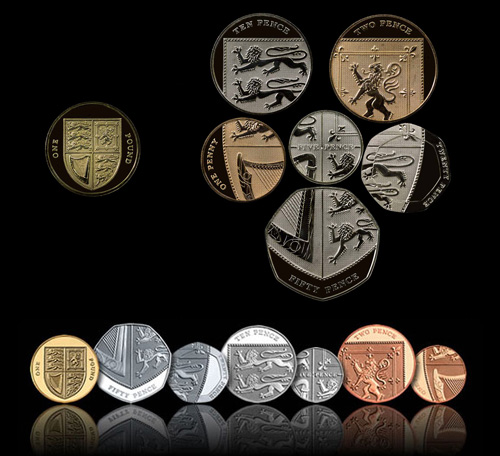