Board games going cashless! What’s this world coming to?! 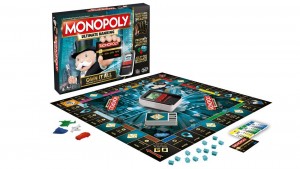 Monopoly Ultimate Banking, a cashless version of the famous board game.

Could toy maker Hasbro be projecting the future of money?

At the 2016 New York Toy Fair, Hasbro announced that it will release an “update” the famedMonopoly game creating the Monopoly Ultimate Banking Game where the cash has been eliminated for electronic bank cards. The bank is now a hand-held unit that will scan the bank cards to make transactions.

As part of the game, the bank card is used to pay rent, taxes from the cards, and buy property. The new property cards will now have bar codes for the players to scan in order to make the purchase or mortgage their property.

This version of Monopoly will still have Chance cards. Previews suggest that the Community Chest cards have been eliminated. Chance cards will now allow for market crashes, fluctuations in rent, and other “real life” scenarios faced in the modern age.

Recently, the advocates for a cashless society or one that uses a limited amount of physical currency have been on their virtual soapboxes trying to find every reason to eliminate cash. One story that appeared on the CNBC website reported about a San Francisco-area restauranteur who tried to accept only credit cards had to reverse the decision because of backlash from customers.

There are segments of our culture who do not trust banks. There are industries that work better when the transactions are made in cash. There are some of us who do not like the electronic trail non-cash transactions create. These are only some of the reason cash will continue to live on.

Hasbro said that the Monopoly Ultimate Banking Game will be released later this summer. My only question is will it support house rules like double payment for landing on Go or having the taxes paid to the Free Parking pool for the next player that lands there?

All images courtesy of Mashable.