In the Spring of 2010 during the recent recession, a group representing business interests in Baltimore formed the Baltimore Green Currency Association. As part of their efforts to support local business, the BCGA created BNotes, a local currency that can be used at participating businesses in and around Baltimore. Currently, there are over 230 businesses accepting the BNote for goods and services.

Legally, the BNote is coupon representing the amount of money on its face and are redeemable at participating merchants. Consumers can receive BNotes as change for a transaction or may visit one of the official cambios (money exchange) locations to exchange dollars for BNotes. For every $10 that is exchanged for BNotes, you will receive a 10-percent bonus, which means if you exchange $10 you will receive BN11. You can also exchange BNotes for dollars at a reverse rate (receive $10 for every BN11 in BNotes).

The first BNotes were issued in April 2011 featuring the designs of Fredrick Douglas on the BN1 note and Edgar Allan Poe on the BN5 note. The reverse of the notes features a Baltimore oriole (the bird, not a ball player) on the $1 BNote and a raven on the reverse of the $5 BNote. 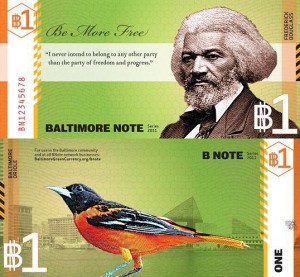 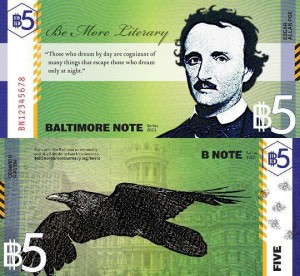 After five years, BCGA wants to create a new series of BNotes adding BN10 and BN20 notes to feature images of two notable Baltimore women. Douglas and Poe will remain on the current two notes. It is being advertised as the first time that women will appear on currency in the United States. Currency collectors know that Martha Washington on the front of the Series 1886 and 1891 $1 silver certificates. She also appeared on the back of the Series 1896 $1 silver certificate.

In order to raise the $15,000 needed to print a new series of BNotes, BGCA has started an Indiegogo campaign. To receive the new notes, you have to give $30 to receive a new BN1, BN5, and BN10 with the same serial numbers. For $50 you can get all four notes with the same serial number. There are other perks like a special tote, invitation to a cocktail party, framed notes, etc.

Although BGCA will announce the women to be featured on the notes later this month, it may be a good bet that Sen. Barbara Mikulski. Senator Barb, 79, is a Baltimore native who will retire after this session. Before serving five terms as senator, she served 5 terms representing Maryland’s Third District in the House of Representatives. Mikulski started her political career in 1971 as a member of the Baltimore City Council.

There have been previous attempts to create tokens using a crowd funding campaign, but this appears to be the first attempt to create a community currency in this manner. If this is a success, it could inspire other business communities to do something similar. For collectors, it is a unique, inexpensive collectible.