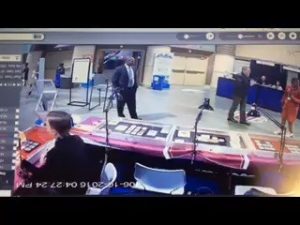 Watchers of the @coinsblog Twitter feed have seen that I post storied of robberies of coin collections. These are heart breaking stories not because the owner lost something of value. They lost something of emotional value.

I have seen stories of a stash of mostly Morgan silver dollars that have been stolen from a dresser draw that the owner either has saved all of these years or were from a relative who saved them as part of a hedge from a depression. There was a story that a young single mother found gold coins in her late father’s house and was going to use the coins to care for her children only to have someone she trusted later steal the coins. Then the story of the Flying Eagle and Indian Head cent collection with most coins in almost uncirculated quality including a 1909-S coin put together by a late grandparent that was stolen while the family was on vacation.

While these are heartbreaking, it is great to hear about the community working together to capture a thief.

Two thieves went to the Long Beach Expo looking to cash in on their ill-gotten gain when a dealer thought he recognized the coins as described from an earlier robbery. The dealer notified on-site security who apprehended the criminals. They were handed over the Long Beach police.

It is wonderful that the community will pay attention to these unfortunate incidents and help law enforcement recover these coins!

Positive Protection Guard Tackles
Suspected Coin Thief In Long Beach
(Long Beach, California) — A suspected thief was tackled by a Positive Protection, Inc. (www.ppius.com) security guard as he tried to escape at the Long Beach Coin, Currency, Stamp & Sports Collectible Expo (www.LongBeachExpo.com) on Friday, June 10, 2016. An alleged accomplice with a backpack containing more than $300,000 of rare coins was also taken into custody.
Both suspects were turned over to Long Beach police on suspicion of burglary, robbery and possession of stolen property. Two other suspects were arrested the next day and more stolen coins were recovered.
“They reportedly were trying to sell coins at the Long Beach Expo in the Long Beach Convention Center. One dealer they approached, Karl Stephens, thought the coins they were offering had been stolen earlier in a robbery in the San Bernardino, California area,” said Patrick Coward, a guard for Positive Protection of Temecula, California, a company that provides security services for coin and jewelry dealers.
“When the suspects tried to leave, the dealer shouted out to stop them. I was nearby and when one suspect started to run I chased him and tackled him at the door. Additional security personnel from the show helped subdue him. The second suspect was stopped without a problem at the door as he tried leave. His backpack was filled with more than 100 ancient coins and other gold and silver coins worth more than $300,000,” explained Coward, a former New York City homicide detective.
The brief chase and the tackle were captured on surveillance video at the booth of Stack’s Bowers Galleries (www.stacksbowers.com) of Santa Ana, California and New York City.
“With the help of a knowledgeable dealer and the fast action of trained security professionals, two suspected thieves were caught and valuable, stolen rare coins have been recovered,” said Robert Brueggeman, President of Positive Protection which provides on-site security for all the Whitman Expo and American Numismatic Association convention shows. “We always want a safe, enjoyable environment for dealers and the public at these collectible shows, but we also must always be on alert.”
A day after the capture of the two suspects at the coin show, Long Beach Police arrested two more suspects who reportedly came to retrieve the car of the first two suspects. Investigators recovered from the car what is believed to be the remainder of the stolen rare coins.

This surveillance video shows Positive Protection, Inc. security guard and former New York City Police homicide detective Patrick Coward on the left as he immediately chased and tackled a suspected coin thief when the suspect tried to flee from a coin show in Long Beach, California on Friday, June 10, 2016. His alleged accomplice is then stopped at the door while carrying a backpack with a reported $300,000 in rare coins believed stolen in an earlier theft in the San Bernardino, California area.