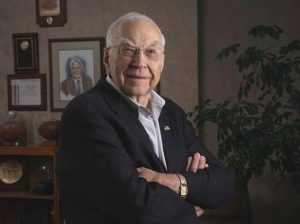 The numismatic world lost one of its great pioneers when Chester Lee “Chet” Krause passed away on June 25, 2016 from congestive heart failure. Chet was 92.

There are many tributes to Chet that will discuss his life and accomplishments you can read here, here, here, and this tribute by the current editor of Numismatic News Dave Harper.

I cannot say that I was Chet’s personal friend, but when you were around him he treated you like you were his best friend. The few times we met, he was a gentleman and generous with his time and knowledge. He was willing to talk numismatics as long as he could.

And he insisted that everyone call him Chet.

When I met him for the first time at the 2007 World’s Fair of Money where he became a member of the ANA Board of Governors, I said, “It is a sincere pleasure to meet you, Mr. Krause.” He chuckled as he said to call him Chet. I had a feeling that this was a theme throughout his life.

Chet published the first Numismatic News in 1952 in order to communicate with other coin collectors especially those living in rural areas. Later, he would work with Cliff Mishler to compile the Standard Catalog of World Coins, probably the most significant resource for collectors of world coins. Krause-Mishler (KM) numbers are a standard catalog identification system used by many collectors.

Chet was not just a numismatic publisher. Krause Publications published Old Cars, a weekly magazine for people with interest in classic and antique cars. Krause publications also publishes books and magazines about antiques, crafts, comics, outdoors, and other personal interests. While some see the Standard Catalog of World Coins is seen as a seminal work in the numismatic industry, Warman’s Antiques & Collectibles is a seminal work for those of us in that industry.

Regardless of his success, he was just Chet, an icon but you would never know it if you met him.

On behalf of the world you touched, from numismatics to collectibles, thank you Chet for helping make collecting that much more enjoyable.