Have you noticed that every election “is the most important in our history?” Or that “you have no clearer choice” than whatever any of the candidates are selling? There are so many clichés that it would require its own blog post.

But what does that have to do with numismatics?

Long-Stanton Manufacturing Company was founded in 1862 by John Stanton to make copper tokens that were used by merchants in the Cincinnati area when money was in short supply during the Civil War. Before starting his company, Stanton owned a company that provided the illustrations and dies that were used to make advertising tokens for the 1860 election.

The Election of 1860 preceded the outbreak of the Civil War. It featured fractured party nominees arguing over the future of the union. The Republican Party, formed out of the ashes of the Whig Party, nominated former representative from Illinois Abraham Lincoln. The Democratic Party nominated Illinois Senator Stephen A. Douglas. But the Democrats were split along the issue of slavery. Pro-slavery southern Democrats formed their own party and nominated then Vice President John C. Breckinridge from Kentucky. A few other candidates were nominated but these were the three that were the focus of the election.

One thing that is considered a highlight of this campaign were the famous debates between Abraham Lincoln and Stephen Douglas. The main theme of the seven debates was slavery. Primarily, Lincoln was anti-slavery and maintaining the union. Douglas was not pro-slavery but favored new territories to choose their own paths. Lincoln argued in his “House Divided” speech that Douglas wanted to nationalize slavery. This came following Douglas’s sponsoring of the Kansas-Nebraska Act that repealed the ban on slavery in the new territories passed as part of the Missouri Compromise.

Although the use of language was more refined in 1858, the issues were just as divisive.

Seven debates were not enough for the public. Manufacturers, such as the one that Stanton provided illustration and die making services for, struck tokens for the candidates and their supporters to give away to gain support. Lincoln won the Election of 1860 with a majority of the electoral votes carrying 18 of 33 states while gaining only 39.8-percent of the popular vote.

Some say the election of 2016 is the most divided in our history. If we do not count the Election of 1824 in which nobody received a majority of electoral votes and the results had to be decided by the House of Representatives, it could be one of the more contentious election since the 1976 Carter-Ford race.

The folks at Long-Stanton thinks there is an indecision in this election, although the polls show that the country is about evenly split. They think to celebrate the 156 years since John Stanton created his tokens the company created their Indecision 2016 token.

Indecision 2016 token is 39mm and made of brass. Portraits of each of the candidates are on either side. If you are undecided, you can flip the token to choose who you will vote for.

Unfortunately, the portraits barely represent the candidates. While the TRUMP side of the token is passible the CLINTON side would not be recognizable if it was not marked. While I do not consider either candidate physically attractive these portraits are worse.

Since it is expensive to produce tokens and medals to just give away, the tradition of striking these types of pocket pieces are no longer part of the campaign. If you have ever read Warman’s Political Collectibles: Identification and Price Guide, you would see all the interesting trinkets that would be produced in support of the candidates. Nowadays, those who collect political memorabilia would be hard pressed to find something more than a button or lapel pin.

Having received the Brexit token, I decided to purchase one of the Long-Stanton Indecision 2016 tokens for my collection. Although the token looks better in hand since it has a proof-like strike, a close-up view of the portraits are about as bad as the images on Long-Stanton’s website. For $8.95 for a single token, including shipping, it is not a bad deal. They do offer discounts for buying more than a few. 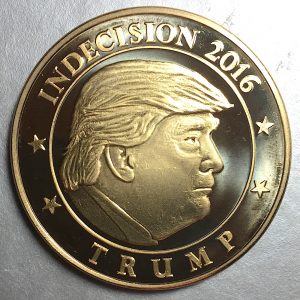 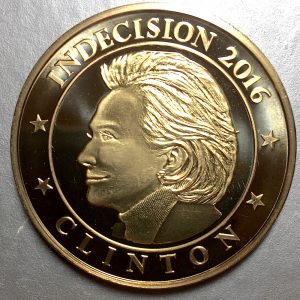 Included in the package was an aluminum token from Long-Stanton that is “GOOD FOR 50 IN MERCHANDISE.” It does not identify the exact value of 50 whether it means cents or dollars, but it does not matter since it is unlikely to be redeemed from my collection. At 31mm it is smaller than the Indecision 2016 token but it is a throwback to times when tokens were created for store credit before paper coupons became ubiquitous. 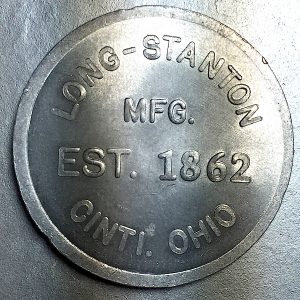 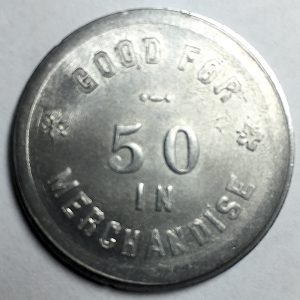 Rather than go with my numismatic collection, this token will go along with a small collection I have of political memorabilia. It will join other numismatic-related items that are related to my favorite president Teddy Roosevelt. I hope he is not insulted by either of these candidates. Somehow, I think T.R., George Washington, Thomas Jefferson and Abraham Lincoln might not be happy if they were around today.