Toying with a Challenge Coin

Toys for Tots is a charitable organization founded in 1947 by Major Bill Hendricks, a U.S. Marine Corps Reserve officer. MAJ Hendricks was inspired by his wife who wanted to donate a homemade Raggedy Ann doll to a needy child in the Los Angeles are but could not find an organization that could help. He organized other reservists and collected 5,000 toys to distribute in the Los Angeles area during the Christmas season.

Although Toys for Tots has been only accepting new toys since 1980 because of the time to process used toys, every year the organization collects millions of toys to make Christmas brighter for children who would not otherwise receive toys. It is consistently rated one of the top charities in many different rankings and can boast one of the largest program to support services ratio. In 2015, Toys for Tots reported that only 3-percent of their monetary donations were used for administrative and support services.

Charities are trying to survive as donations have fallen since the Great Recession of 2008. Their balance sheets are getting better but many have not recovered to pre-recession levels. When they mail their letters asking for donation, most charities have added “prizes” to their request in order to get your attention. Some of the usual gimmicks have been address labels, stamps to mail back the donation, and some have added a nickel to the response form asking that it be returned with the donation. I have also received a lot of stickers and religious-based charms.

As a supporter of Toys for Tots, I recently received a request for donation. Rather than having any of the usual gimmicks a medal was attached to the request. Not an ordinary medal but a bronze medal for the Toys for Tots program. The 26mm medal (a quarter is 24.26mm) features the Toys for Tots logo on one side and the U.S. Marine Corps logo on the other. The 2mm thin (a quarter is 1.75mm) medal has an antiqued finish. 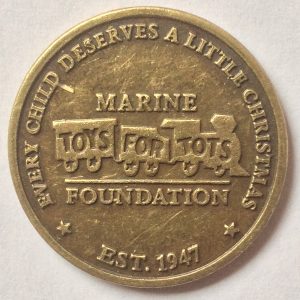 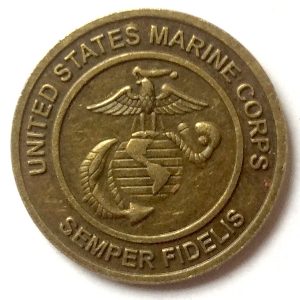 While the size of this Toys for Tots medal is smaller than the typical challenge coin, it can be considered a challenge coin. A challenge coin given by the Marine Foundation to their donors in recognition of the support of the organization.

I appreciate the recognition from the Marine Foundation and will continue to be a supporter for the Toys for Tots program.