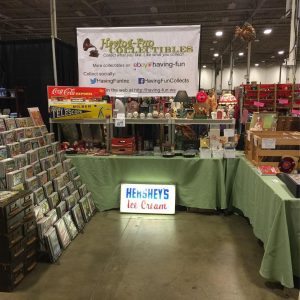 My booth at DC Big Flea after setup. At least half of what you see was sold on 9/16!

As this is being posted I am packing up after working this past weekend at the DC Big Flea Market and Antique Show in Chantilly, Virginia. Since I have been working in the collectibles business, I have been trying to sell at one show a month with DC Big Flea being the show I work every other month. Aside from this show is close to home, I think I have found the right mix of items to be successful.

Working shows in the collectibles and antiques market is no different from a numismatic dealer on the bourse floor. Each dealer specializes in an area and tries to find the right mix of inventory and prices to make the show a success.

Although this sounds like common business sense, there are times when I go to shows and ask the dealers how they are doing I get grumbles from many and smiles from the rest. What I am guessing is that the grumblers have not adapted to the market trends.

I learned that turning over my inventory, regardless of the cost, is very important. Having stale inventory means that my money is tied up in that inventory and does not do me any good invested in that inventory. I have to find fresh items and make sure that those who are regulars and those who want to be regulars know that the next time they see me that I will have something new, even if it is in the category of merchandise I sell.

There are two lessons I have learned in the last few years. First, it is not going to hurt my bottom line if a customer asks for an additional discount such as another $5 or 10-percent off. It makes them feel like they found a bargain and I move the inventory. But that lesson is not possible without my second lesson is to treat the entire inventory as a single unit. By treating the inventory as a single unit, if I sell something at full price to someone who does not want to negotiate but sell the next item for a deeper discount, I am no better off than I thought I would have been.

With some exceptions, I think that many numismatic dealers get stuck with the idea, “this is what I paid so I have the get this price to at least break even.” If I worked that way my truck would come home loaded with inventory and more work to do. However, with the inventory sold, I now have the money to find something fresh for the next show.

Just something for the dealers to think about.

Now for this week’s news:

How Chinese mulberry bark paved the way for paper money

The value of modern currency comes not from what it's made of, but what we all agree it's worth.

Threshold Moments in the Evolution of Money

The notion of money has been an important part of the human way of life for more than 2,900 years. When looking back at its origins, there is no doubt that the trade system has evolved considerably. As we mentioned before, bartering was used as the main system for the exchange of all kinds of goods and products.

Harriet Tubman Should Really, Really Be on the $20 Bill

If anyone should not be on money, it’s Andrew Jackson. The 7th President of the United States hated paper money. He also hated Native Americans and loved having slaves, but for now, let’s focus on how he believed that the United States should only have gold and silver coins as currency.

Luciano: Do you have a coin like this in your pocket?

Ever throw in your two cents? Probably not like a visitor did recently at the Peoria County Courthouse. At the security checkpoint Aug. 31, someone left

In February of 1870, a sparkling new steam-powered coin press inside the United States Mint in Carson City struck its first coin, a Seated Liberty silver dollar with a crisp

From Viking silver to Roman bronze, amateur treasure hunters in Europe locate all kinds of buried treasures with their metal detectors. Now, a new hoard is making headlines: As the ChronicleLive reports, the caretaker of a primary school in Northumberland, England used his own electronic device to find a stash of Medieval-era silver coins buried underneath the school's playground.

A Silver Coin for Mexico: History Lesson and a Stellar Proposal

My friend Hugo Salinas Price, a tireless promoter of sound money, offers a Primer on the Mexican ‘Libertad’ Silver Ounce as a Vehicle for Savings of the Common Folk. This is a guest post by Hugo Salinas Price.

Commemorative coins: How Indian currency has served as a publicity tool

India issued its first commemorative coin series back in 1964 in the honour of India’s first prime minister Jawaharlal Nehru. It was the same year of Nehru’s passing away. Over the last 53 years, commemorative coins have been issued for various reasons — some as uncirculated collectors items and others for mass circulation.

One-cent coins as well as 10-cent and 25-cent coins will soon no longer be legal tender in Jamaica. (Photo: Jamaica Gleaner)

Who Stole ‘The Big Maple Leaf,’ the Biggest Coin in the World?

The Big Maple Leaf was named the largest coin in the world by the Guinness World Records in 2007. But a group of thieves ensured its life in the public spotlight would be brief.