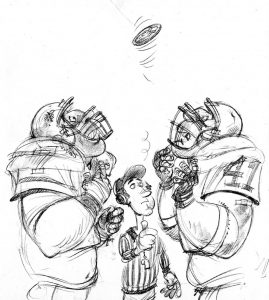 For a brief history of the coin toss read this article at the Provident Metals Blog.

Labor Day was created by the labor movement in the late 19th century to celebrate the contributions that workers have made to the strength, prosperity, and well-being of the country. It became an official federal holiday in 1894 and marks the unofficial end of summer.

Aside from having a three day weekend, it is traditionally the weekend that college football begins its season. The seasons started Thursday night and will continue until the Chick-Fil-A Kickoff Classic on Monday night. Next Thursday, the NFL season begins.

Football season also means that as I search for numismatic-related news, the term “coin toss” will fill up the search results. This year there may be a twist in that there are reports that some games, networks, and conferences will be creating their own coin to toss. Some have reported that they will be selling the coins for collectors while others may auction game used coins for charity. This is an opportunity for sports fans and exonumia collectors to have some fun together.

Yes, These are Medals

I know these are medals since they have no denomination and not produced by a government. I decided to use the common vernacular rather than being technically correct!

If you are looking for the manufacture of these coins, you can visit the website for the Highland Mint. It appears that they have the contracts with all of the sports leagues to provide coin and coin-related souvenirs.

Among those captivated by the recent story of the little Israeli girl who stumbled on a 2,000-year-old half-shekel coin — only to learn some days later that what she had found was a roughly 15-year-old souvenir — was Prime Minister Benjamin Netanyahu.

Armed with a metal detector in 2014, Jim Bailey unearthed a small, silver coin about the size of an American dime that once belonged to a pirate. MIDDLETOWN, R.I. (WJAR) — Sweet Berry Farm in Middletown covers more than 100 acres.

JERSEY CITY – The United States Mint has introduced a New Jersey-inspired coin into circulation as part of its “America the Beautiful Quarters” program. Dozens gathered at Ellis Island on Wednesday morning for the debut of the “Island of Hope” coin, which depicts a family of immigrants arriving to the United States.

The US is losing money on each penny produced, but it wouldn’t be easy to ban the coin

Governments have long waged a war on cash in an attempt to curb terrorism and tax evasion. Their focus has typically been on eliminating large denominations, like Europe’s €500 bill or India’s 1,000 rupee note.

Police in the northwestern German city of Cologne hit an unexpected jackpot when they chanced upon historical coins and currency notes during a drug-related search. The historical loot was found in a black carry-on suitcase in May 2017, police said on Thursday.

The how, why and when of money – Vernon Morning Star