Sometimes, I find it difficult to keep an open mind with some of the non-circulating legal tender (NCLT) coins that are on the market.

Some of the themes have started as interesting ideas have turned into blatant commercialism that I am not sure how to interpret its benefits to the hobby.

From superheroes to movie tie-ins to the cartoons, the themes are as varied as the grocery store shelves.

The latest NCLT that has me wondering about the future of the hobby is the 2018 Fiji Coca-Cola Bottle Cap-Shaped Dollar.

Yes, a Coca-Cola bottle cap-shaped coin with a face value of one Fijian dollar. The reverse of the coin is colored the famous Coca-Cola red with the script logo that is familiar to anyone who has passed by a Coca-Cola product. The obverse has the Fijian coat of arms, the date, and the specifications of the coin: 6 grams of .999 fine silver. 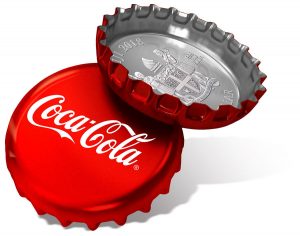 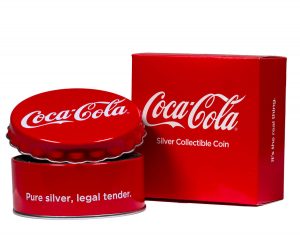 After looking at the specifications, the coin is 32.6 mm (1.283 inches) in diameter and I thought that the coins were going to be very thin.

Comparing the specification of this coin to pre-1965 United States coins that were made of .900 silver, the Washington quarter was made of 6.25 grams of silver and copper but was 24.3 mm (.957 inches) in diameter. The quarter is .25 grams heavier but 8.3 mm smaller. My caliper measured a 1960 uncirculated Washington quarter with a thickness of 1.75 mm.

To satisfy my curiosity, the caliper said that the uncirculated 1964 Kennedy half-dollar in my collection was 2.15 mm thick.

Not counting for the flare of the edges to resemble a bottle cap, the coin is probably 1 mm thick, less than the 1.35 mm of a 1955 Roosevelt dime I measured.

The coin is available for pre-order only from one company on eBay for $29.95 with free shipping. Expected shipping is on December 8, 2017.

The last time I checked, the listing reported that 1,481 of these coins were sold.

If someone buys one of these coins, feel free to write a review. I will publish it here on the blog!

BRENTWOOD — When milestones are reached in the armed forces, servicemen and women often receive a challenge coin, creating solidarity with others who share the same accomplishment.

A hoard of 21 Islamic gold dinars, 2,200 silver coins, and gold artifacts dating to the 12th century CE has been unearthed by archaeologists digging at the Abbey of Cluny, a former Benedictine monastery in Cluny, Saône-et-Loire, France.

The 50p worth £120! Sir Isaac Newton coin sells for 240 times its original value on eBay

IF you've got one of these most sought-after 50p coins then you could be sitting on a tidy profit. The Sir Isaac Newton 50p coin was introduced into circulation in September and Brits are slowly starting to find it in their spare change.

An "exceptional and rare" medieval treasure trove including more than 2,200 gold and silver coins has been found in France in what has been called a "remarkable" discovery by archaeologists. It's the kind of discovery archaeologists dream of.

Eric Newman, Whose Coins Told of America’s History, Dies at 106

It was just a strange old penny, a copper-nickel Indian Head minted in 1859, when the government was trying out different metals for one-cent pieces. A grandfather gave it to Eric Pfeiffer Newman in 1918, when he was 7, a little bonus for his nickel-a-week allowance.

A metal detectorist has tracked down a rare gold coin from Richard III's reign near to the site of the Battle of Bosworth. The Half Angel is one of just a handful of such coins that have survived from the king's two-year reign.

Archaeologists with the National Center for Scientific Research and other institutions in France revealed today that they have unearthed 2,200 silver deniers and oboles, 21 Islamic gold dinars, a very expensive gold signet ring and other objects made of gold from the Abbey of Cluny, located in the department of Saône-et-Loire.